Masks rules get tighter in Europe in winter's COVID wave 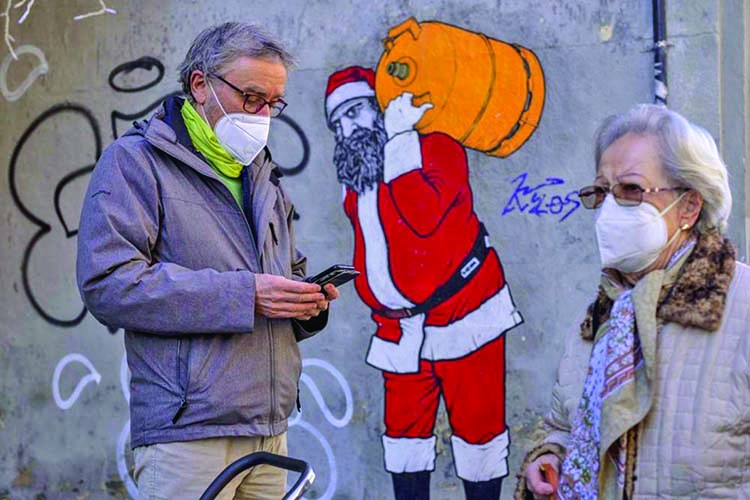 A man and woman wearing FFP2 masks to curb the spread of COVID-19 are seen in front of a mural depicting Santa Claus, in Madrid, Spain, Jan 12, 2022. -AP
To mask or not to mask is a question Italy settled early in the COVID-19 outbreak with a vigorous "yes." Now the onetime epicenter of the pandemic in Europe hopes even stricter mask rules will help it beat the latest infection surge.Other countries are taking similar action as the more transmissible - yet, apparently, less virulent - omicron variant spreads through the continent.
With intensive care units in Italy's hospitals rapidly filling with mostly unvaccinated COVID-19 patients, the government announced on Christmas Eve that FFP2 masks - which offer users more protection than cloth or surgical masks - must be worn on public transport, including planes, trains, ferries and subways.
That's even though all passengers in Italy, as of this week, must be vaccinated or recently recovered from COVID-19. FFP2s also must now be worn at theaters, cinemas and sports events, indoors or out, and can't be removed even for their wearers to eat or drink.
Italy reintroduced an outdoor mask mandate. It had never lifted its indoor mandate - even when infections sharply dropped in the summer. On a chilly morning in Rome this week, Lillo D'Amico, 84, sported a wool cap and white FFP2 as he bought a newspaper at his neighborhood newsstand. "(Masks) cost little money, they cost you a small sacrifice," he said.

"When you do the math, it costs far less than hospitalization." When he sees someone from the unmasked minority walking by, he keeps a distance. "They see (masks) as an affront to their freedom," D'Amico said, shrugging.
Spain reinstated its outdoor mask rule on Christmas Eve. After the 14-day contagion rate soared to 2,722 new infections per 100,000 people by the end of last week - from 40 per 100,000 in mid-October - Prime Minister Pedro Sánchez was asked whether the outdoor mask mandate was helping."Of course, it is. It's not me saying it. It's science itself saying it because (it's) a virus that is contracted when one exhales," Sanchez said.