Kapil reveals what happened after he tweeted PM Modi 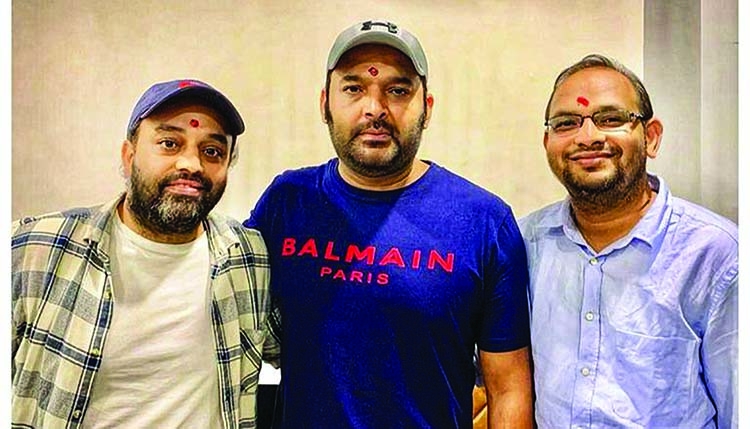 The first trailer of comedian Kapil Sharma's Netflix special, I Am Not Done Yet, is here and the comedian has fulfilled his promise of telling his life story, his way. The self-deprecatory stand-up act has the comedian taking pot-shots at himself, his love for tipple and tweets after that, as well as his love story with wife Ginny Chatrath.
In the new promo for Kapil's Netflix stand-up, the comedian tells everyone that his father told him about the house and his sister's marriage but he didn't tell him whom to settle down with. He said, "I knew whom to settle down with. That was Ginni, my wife." He then asked Ginni, who's sitting in the audience, "What made you fall in love with a scooter owner?" Ginni, who rarely makes a public appearance, answered, "Everyone falls in love with a rich guy. I thought of doing some charity for this poor guy." The audience started laughing, along with Bharti Singh, who was sitting right next to Ginni.
In another instance, Kapil said that he would often practice in front of the mirror saying, 'I am not done yet', which is incidentally the title of his stand-up. He said, "One day, Ginni threw a pillow at me and screamed 'We had two babies in one and half years.
What's your plan?'"Kapil Sharma addressed his infamous tweet to PM Narendra Modi and how OB vans assembled outside his house the next morning. He said, "I thought they were fire brigade vans. I asked my cook, whether there had been a fire. He answered, 'You caused one on Twitter!" Kapil also said, "Not all the tweets were mine, some were from Jack Daniel… based on that, you can't 'black label' some artistes, I mean blacklist."
The 2016 tweet to the PM had Kapil complaining about the BMC. His tweet read, "I am paying Rs 15 cr income tax from last 5-year n still i have to pay 5 lacs bribe to BMC office for making my office @narendramodi." The comedian had faced a backlash for the tweet.The stand-up also featured Kapil's mother, his wife, and friends from The Kapil Sharma Show. Rochelle Rao, Keith Sequeira and Sudesh Lehri were present as well. Kapil's stand-up special, titled I'm Not Done Yet, will arrive on Netflix on January 28.
Netflix synopsis of Kapil's show says: "Amritsar ki galiyon se Mumbai ke sets tak (From the streets of Amritsar to the sets of Mumbai), Kapil Sharma has been entertaining us for a while now, but he is not done yet! Our favorite comedian is all set to tickle your funny bones, this time on Netflix with his first comedy special marking his streaming debut. Kapil Sharma: I'm Not Done Yet, releasing on January 28, 2022, reveals Kapil in a never before seen avatar."