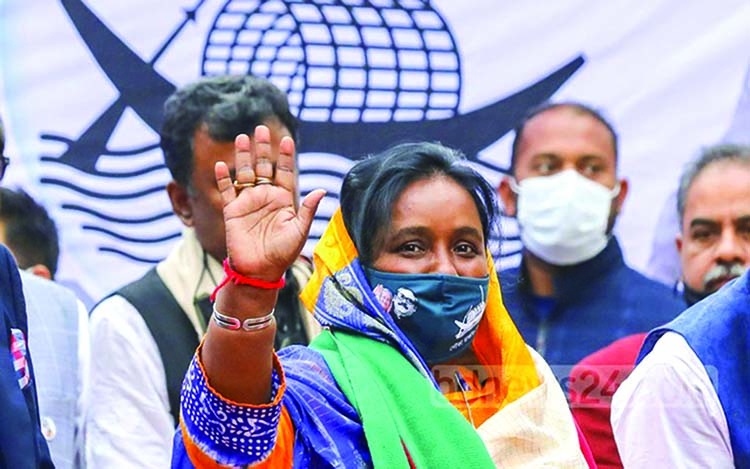 Dr Selina Hayat Ivy, the Awami League nominated mayoral candidate in the Narayanganj City Corporation (NCC), campaigns with party leaders and supporters on Friday. -Agency
Selina Hayat Ivy, the ruling party Awami League's mayoral candidate for the Narayanganj City Corporation (NCC) polls, has exuded confidence saying she will win the election by a margin of over 1 lakh votes. Her remarks came on Friday, the last day for campaigning, ahead of the polls slated for 16 January.
"Efforts are ongoing to undermine my winning chances. But everyone knows my victory is certain," the two-term incumbent mayor told reporters at her residence after a campaign rally, held at gate-2 in the city centre.Thanking Narayanganj voters for their support on the last two occasions, Ivy said, "I am asking for your support one more time so that I can continue to work against corruption and injustice."
Senior Awami League leader Jahangir Kabir Nanak, who attended the rally as the chief guest told the city voters that Ivy is not a newcomer and she has nothing else to prove. "She stood against terrorism in the city and she fought for peace," Nanak told the rally before asking the voters to vote for Ivy.
Quoting Prime Minister Sheikh Hasina, Nanak said, "The prime minister sent me to tell you, if Ivy is elected mayor of Narayanganj, the prime minister will personally take the responsibility for the city's development." Nanak also called on party leaders and activists to maintain a peaceful environment on polls day.
After the rally, thousands of local activists of the ruling party took out a procession and moved throughout the city before it ended at the local party office.Voters said they feel the ruling party candidate is ahead in the mayoral race, however, some are expecting a close contest between Ivy and BNP-backed independent candidate Taimur Alam.
"Ivy has done a lot for the city. She has spearheaded many development works," said Mohammad Sayeed, a local clothing merchant. However, he also added that the street vendors are happy with Ivy as she successfully ended the trend of extortion."We can do business without any trouble. Besides, she has done a lot of work. We want her again," said street vendor Mohammad Asad. Responding to a media query, Ivy hoped that the polls will be free and fair and held in a festive mood.