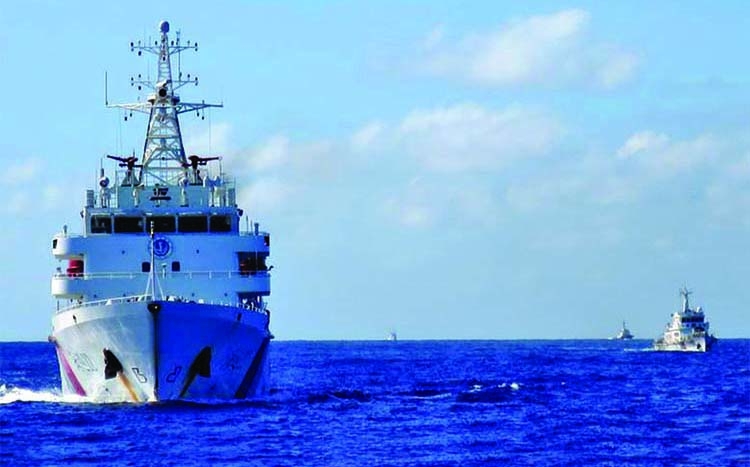 Beijing has hit back at a new United States report that says its maritime claims in the South China Sea are "unlawful", calling it misleading and a distortion of international law.China's Foreign Ministry spokesman Wang Wenbin said at a daily press briefing that the study, released on Wednesday (Jan 12) by the US State Department's Office of Ocean and Polar Affairs, "distorts international law, misleads the public, sows discord and disrupts the regional situation".
He pointed out on Thursday that unlike China, the US has not ratified the United Nations Convention on the Law of the Sea (Unclos) and yet "considers itself a judge of the Convention".The 47-page report lays out in comprehensive detail Washington's case against Beijing, pointing out that the geographic and historic bases for Chinese claims are "inconsistent with international law" under Unclos.
For instance, it says that China claims sovereignty over more than 100 features that are underwater during high tide, meaning they are "not subject to a lawful sovereignty claim or capable of generating maritime zones such as a territorial sea"."The overall effect of these maritime claims is that the PRC unlawfully claims sovereignty or some form of exclusive jurisdiction over most of the South China Sea," said the study, using the acronym for the People's Republic of China.
China's expansive claims in the South China Sea are disputed by Brunei, Malaysia, the Philippines, Taiwan and Vietnam which have competing claims. Rebuffing the US report, Mr Wang said: "As an extraterritorial country, the United States frequently creates disputes in the South China Sea and sows discord among countries in the region, this is completely unpopular. The international community sees this very clearly."
He added that Beijing would work with countries in Asean to achieve "peace and stability in the South China Sea and promote regional prosperity and development".Maritime security expert Collin Koh from the S. Rajaratnam School of International Studies said the report is the latest move in what he says is a gradual shift from the Trump administration's often military-focused approach to confronting China in the South China Sea, to a more "political and legal" approach.
He pointed out that the release of the report now - at a time when there is talk about reinvigorating stalled negotiations for a code of conduct in the South China Sea between Beijing and Asean countries - seemed to be Washington's effort to shape and influence the talks."Asean countries will look at this report with great interest. The materials enshrined in the report will be very useful in helping to further strengthen the position of Asean parties in a negotiation with China," he said.
International relations expert Shi Yinhong of Renmin University of China said the study would likely encourage South-east Asian countries that dispute Beijing's claims to stand up to China."With the US holding such a tough position, countries like Vietnam, Malaysia, Indonesia will feel a sense of reassurance," said Prof Shi.Indonesia is not a claimant state in the South China Sea but is in an ongoing dispute with China over control of the Natuna islands.
Prof Shi and other Chinese experts see the study as a continuation of Washington's efforts to pressure Beijing in the disputed waters, stretching back to the previous administration which had said that China's claims were unlawful."The US has now completely moved towards denying China's claims in the South China Sea, its sovereignty and maritime rights and interests. This is very clear," said Professor Zhu Feng, dean of the Institute of International Relations at Nanjing University.
---ST