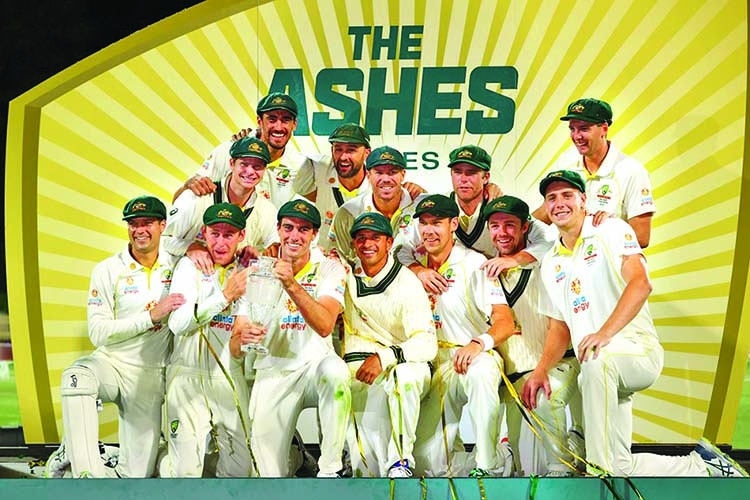 Australia celebrates their Ashes series win over England on Sunday by winning the fifth Test by 146 runs with two days to spare. -Getty
Australia completed a dominant 4-0 Ashes series victory over England on Sunday by winning the fifth Test by 146 runs with two days to spare.England, set a target of 271 for victory, crashed to 124 all in the last session on the third day at Hobart, losing 10 wickets for 56 after Zak Crawley (36) and Rory Burns (26) combined in a 68-run opening stand.
Fast bowlers Scott Boland (3-18) and Cameron Green (3-21) made an impact in their first Ashes series by sharing six wickets on a lively greenish wicket as England crumbled against pace for the second time in the match after being dismissed for 188 in the first innings. Australia skipper Pat Cummins also returned well in his second spell to finish with 3-42 on an eventful day that saw 17 wickets tumble. Earlier, Australia was bowled out for 155 just after the dinner break for an overall lead of 270 runs.
Paceman Mark Wood snared 6-37, utilising short-ball tactics against the Australians. Alex Carey top-scored for Australia with 49 after getting two reprieves. Australia won the first three test matches before England escaped with a draw at Sydney, where the last pair of batters survived the final two overs under intense pressure in a result that eventually meant the tourists avoided a 5-0 sweep.
---AP, Hobart