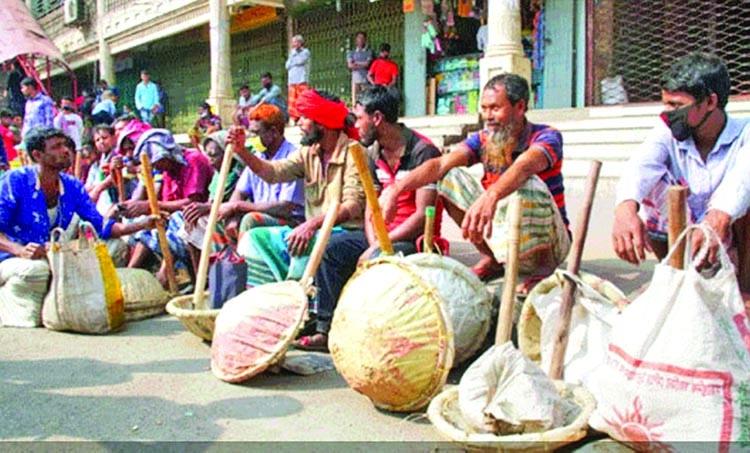 The day laborers are the worst sufferer of the coronavirus pandemic. The photo was recently taken from Dhaka's Mirpur area. -AA
The global job market will take longer to recover than previously thought, with unemployment set to remain above pre-Covid-19 levels until at least 2023 due to uncertainty about the pandemic's course and duration, the International Labour Organisation said in a report on Monday.
The UN agency estimates the equivalent of around 52 million fewer jobs in 2022 versus pre-COVID levels, which amounts to about double its previous estimate from June 2021.Disruptions are set to continue into 2023 when there will still be around 27 million fewer jobs, it said, warning of a "slow and uncertain" recovery in its World Employment and Social Outlook report for 2022, bdnews24 reports.
"The global labor market outlook has deteriorated since the ILO's last projections; a return to pre-pandemic performance is likely to remain elusive for much of the world over the coming years," the report said. Director-General Guy Ryder told journalists that there were numerous factors behind its revision, saying the "primary one is the continuing pandemic and its variants, notably Omicron."
The speed of recovery varies across regions, with the European and North American regions showing the most encouraging signs and Southeast Asia and South America lagging behind, according to the report.
Still, the projected deficit in working hours this year represents an improvement over the past two years. In 2021, the ILO estimates there were some 125 million fewer jobs than pre-pandemic levels and in 2020, 258 million fewer.Overall, around 207 million people are estimated to be unemployed in 2022. However, the report said that the impact would be significantly greater since many people have left the labor force and have yet to return.
Among those are a high number of women, often because they have been drawn into unpaid work at home such as teaching children during school closures or caring for sick family members.The report predicted that the disproportionate impact of the pandemic on women's employment would narrow in the coming years but that a "sizeable gap" would remain.
"There are some anecdotal indications that they are not coming back in the same numbers and in the same portions as men are doing which would lead to concerns that a 'Long COVID' effect on gender at work would be a negative one," said Ryder.Others who have left the workforce have done so voluntarily as part of a phenomenon some economists call "the great resignation". Ryder said this appeared to be more prominent in areas of the economy such as health and care giving."We do need to look again and to invest further in those areas of economic activity," he said.