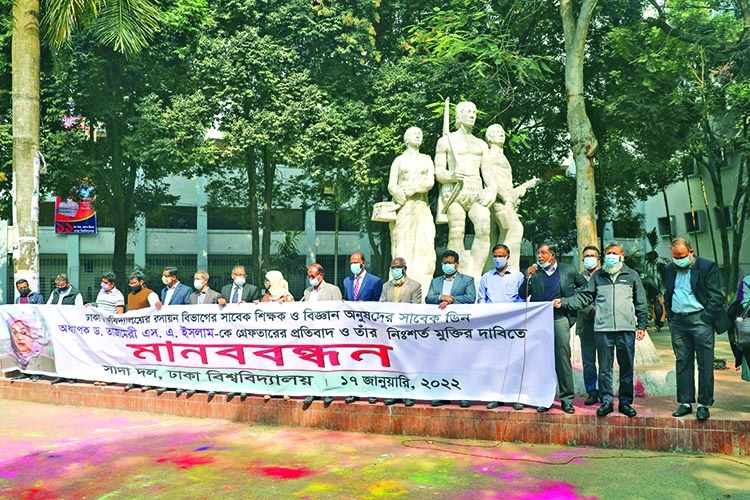 Pro-BNP teachers of Dhaka University stage a human chain at the university campus on Monday demanding immediate release of their former colleague and BNP chairperson Khaleda Zia's adviser Dr Tajmeri Islam. -Agency
BNP Secretary General Mirza Fakhrul Islam Alamgir on Monday alleged that the filing of 'fictitious' cases against their party leaders and activists and arresting them by the government has now become an order of the day. "It seems to have become a routine exercise of the current government to file politically motivated fake and fictitious cases and arrest opposition leaders and activists, including those of BNP and its associate bodies, in a bid to remove them from politics," he said.
In a statement, the BNP leader warned that aggrieved people can rush to the streets at any time to overthrow the present government, UNB reports.The statement was issued protesting the arrest of two Jatiyatabadi Chhatra Dal leaders in Noakhali's Senbagh Upazila on Sunday night.
Fakhrul said the current 'authoritarian' Awami League government, which 'usurped' power shamelessly through vote-rigging the night before the December-30 election, has now begun to rule the country in a completely fascist manner. He alleged that the government has snatched the voting and democratic rights of millions of people by force to cling to power.Fakhrul said BNP leaders and activists are being imprisoned with 'false' charges without any reason to turn Bangladesh into a country without any opposition party.He said the arrest of two JCD leaders in Noakhali's Senbagh Upazila is part of the government's evil activities.
The BNP secretary general said the government has become 'crazy' to arrest and imprison the leaders and activists of the BNP and its associate bodies in 'fabricated' cases to hush up its unprecedented failure to deliver on all fronts.He said public resentment is now escalating as they want to eliminate all the misdeeds and misrule of the government.The BNP leader demanded the government unconditionally release the arrested JCD leaders and withdraw the case filed against them immediately.