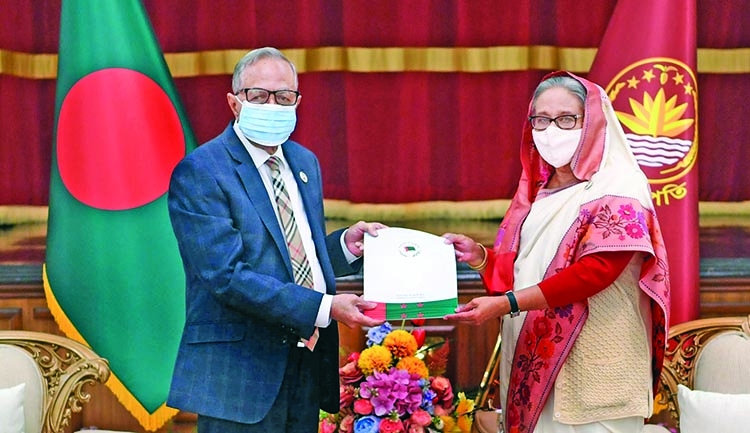 Prime Minister Sheikh Hasina on Monday hands over a set of proposals to President Abdul Hamid at Bangabhaban on formation of the next Election Commission. -PID
Bangladesh Awami League, during the talks with President M Abdul Hamid on Monday placed some proposals, including enacting new law, strengthening the Election Commission (EC) and using EVM like technologies in the polls.
The ruling party AL led by its president and Prime Minister Sheikh Hasina gave the proposals as she led the 10-member delegation to hold talks with the President over forming an acceptable Election Commission (EC), today, the last day of 17-day dialogue with political parties, at the Durbar Hall of Bangabhaban here, President's Press Secretary Md Joynal Abedin told BSS.
Other members of the 10-member delegation are:  AL General Secretary Obaidul Quader, advisory council members Amir Hossain Amu and Tofail Ahmed, presidium members Begum Matia Chowdhury, Sheikh Fazlul Karim Selim, Dr Mohammad Abdur Razzaque,Muhammad Faruk Khan, Jahangir Kabir Nanak and Abdur Rahman.
After the meeting, the press secretary said the AL delegation proposed that the President will appoint the Chief Election Commissioner (CEC) and other Commissioners (ECs) in accordance with Article 118 of the constitution.In the process of making these appointments, the President will appoint those whom he deems suitable and fit, they added. The press secretary said they proposed to increase the use of technology, including EVM system, in the interest of holding free, fair and credible elections.

The AL delegation discussed the formation of an independent and effective EC to ensure a neutral and acceptable election, the responsibilities of the executive branch in polls-time period, the manner of responsible persons of the EC and ensuring accurate voters list and overall security on Election Day, before and after the election.
At the meeting, the Awami League proposed to appoint only the officers and employees of the republic as presiding and polling officers instead of using the officers and employees of the private sector in conducting the elections, and to ensure responsible and impartial role of the individuals assigned in maintaining the law and order.They called for taking necessary steps to ensure that voters at all levels, including religious minorities, can cast their votes in the polls smoothly.
Awami League President and Prime Minister Sheikh Hasina thanked President Abdul Hamid for organizing a dialogue with the political parties to restructure the EC . The head of the government said her party and the government are always ready to co-operate in all possible ways to ensure free, fair and neutral elections through which people would be able to exercise their voting rights.
She informed the President that a draft law for enactment of an EC Formation has been approved by the Cabinet today in accordance with Article 118 of the constitution and the law will be enacted as soon as possible after completing the legal process. Welcoming the AL delegation to Bangabhaban, the President said the EC should be formed as per the constitution.
He said discussions have already been held with all political parties and the next steps will be taken to form an EC in line with the recommendation of the discussions. The head of state thanked the government for approving proposed the EC formation law in the cabinet meeting. The law will be passed in the Jatiya Sangsad as soon as possible and it would reflect public opinions eventually, he hoped.  Secretaries concerned to the Bangabhaban were present there.
Abedin said the President invited a total of 32 political parties, including  AL for a dialogue on forming an independent, neutral and credible EC. On December 20, the first day of the ongoing dialogue with the political parties, President Hamid held a dialogue with the Jatiya Party, the main opposition in the Jatiya Sangsad (Parliament).
Meanwhile, a total of seven political parties, including the Bangladesh Nationalist Party (BNP), refrained from taking part in the dialogue. Earlier, a dialogue was held with the participation of political parties ahead of the ninth, 10th and 11th parliamentary elections. The President has been given the power to appoint Chief Election Commissioner (CEC)  and more than four election commissioners.
In the last few terms, the President formed the EC on the basis of the recommendations of the Search Committee.  The current EC's five-year tenure is scheduled to expire on February 14 next. During this period, the President will form a new EC, under which the 12th Jatiya Sangsad (JS) elections will be held.