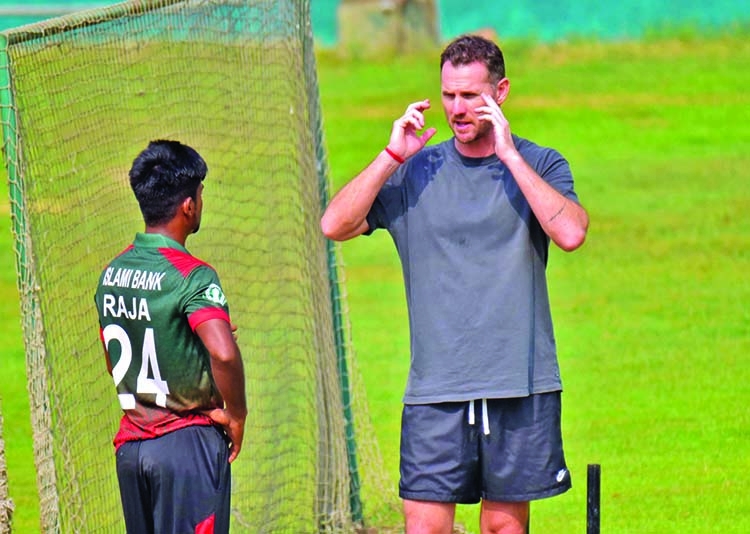 Chattogram Challengers pace bowling coach Shaun Tait seen giving tips to quick Rejaur Rahman Raja during the practice session recently ahead of the upcoming BBPL. -Collected
Former Australia fast bowler Shaun Tait has expressed his desire to become the pace bowling coach of Bangladesh, a post which went vacant following the departure of Ottis Gibson. Gibson decided not to renew his contract with BCB and has already joined English Country Club Yorkshire. He will also work with Multan Sultans in Pakistan Super League (PSL).
"I'm interested for sure. Absolutely," said Tait, who is currently working with Chattogram Challengers as their pace bowling coach in the Bangladesh Premier League (BPL), scheduled to start from January 21. "They (BCB) have got some time to think about who they are going to go with. It'll be a great job," he added.
Tait, one of very few pacers to have clocked over 160kmph, had worked with the Afghanistan team recently as their bowling coach.    He also followed Bangladesh cricket or quite some time and seemed to have impressed with the bowling of young fast bowler Shoriful Islam. "In general, the stage Bangladesh cricket are in, there are so many good young players. They could become great players. Shoriful is an aggressive left arm bowler. He is gonna be extremely important in this team. He has played enough cricket now to know what he is doing.
So, I'm looking forward to working with him." Bangladesh have got quite a decent depth of young players, even fast bowlers. The next 5-6-7 years are gonna be exciting for cricket here in Bangladesh," he added.  Shoriful was an integral cog in Bangladesh's historic Test win against New Zealand earlier this month. Even though the hero of the Test was Ebadot Hossain, Shoriful gave the side initial momentum with his 3-69 in the first innings of the first Test at the Bay Oval in Mount Maunganui.
The pacer was also amongst the wickets in the second New Zealand Test as well. "That (New Zealand) tour was good for Bangladesh in general and certainly for him (Shoriful). He attacks, he bowls on the stumps. You can see he is enthusiastic and loves what he is doing," Tait remarked. BCB cricket operation chairman Jalal Yunus told the reporters that they are happy to know that Tait is interested to work with them but added that they will see how he fare in the BPL before taking a call. "We are glad to know that he is interested to work with us," said Jalal. "He (Tait) has come here to work with Challengers in BPL and we will see how he fares there."