Cold wave may abate at some places 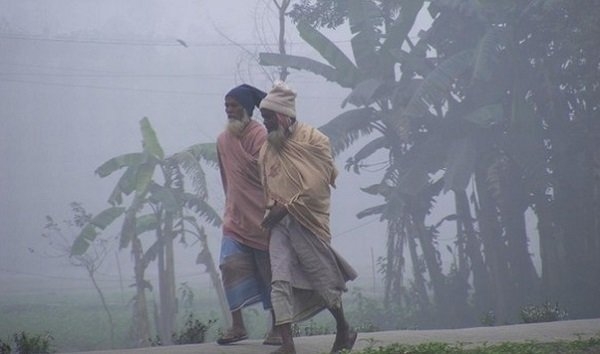 Mild to moderate cold wave is sweeping over
Rangpur division and the districts of Gopalgonj, Mymensingh, Feni,
Moulvibazar, Rajshahi, Pabna, Noagaon, Jashore, Chuadanga and Barishal and
the region of Sitakunda and it may abate at some places.
Weather may remain dry with temporary partly cloudy sky over the country,
said a met release issued for 24-hour commencing at 9 am today.
Moderate to thick fog may occur over river basins and north-western part
and light to moderate fog may occur elsewhere over the country during
midnight to morning.
Night temperature may rise by 1-2 degrees Celsius and day temperature may
rise slightly over the country.
Trough of Westerly low lies over Sub-Himalayan West Bengal and adjoining
area.
Ridge of Sub-continental high extends up to Bihar and adjoining area.
Seasonal low lies over South Bay.
Country's maximum temperature on Sunday was recorded 24.1 degrees Celsius
at Khepupara and minimum temperature today was 6.0 degrees Celsius at
Tetulia.
Today's sunset at 5.44 PM and tomorrow's sunrise at 6.40 AM at Dhaka.