Winter watermelons give hope to farmers in Rangamati 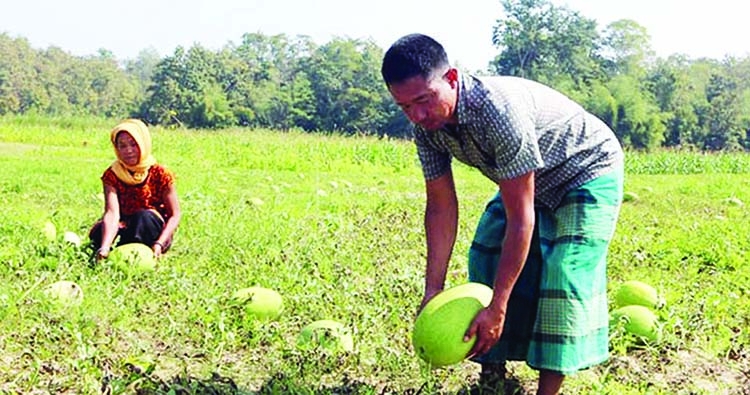 Farmers Juraichhari upazila of Bandarban district are expecting good profit through growing winter watermelons.-AA
Growing winter watermelons give a new hope of making better profit to the farmers in Juraichhari upazila of Bandarban district.  During a ground visit in the upazila, it has been found that several hundred of farmers are busy with collecting watermelons from their croplands. As the price of watermelons is high during early of the season, farmers are hoping to make better profit this season.
Runa Chakma, watermelon growers of Samira village in the upazila, said, "I myself cultivated watermelons for advance profit. I used to sell hundreds of watermelons every day. I am happy to get good profit.""I get a better yield of watermelon due to favorable weather. Apart from the upazila, I used to sell watermelons in Rangamati town for twice or thrice a week", she said.
Dipon Chakma, a farmer from Moidong union, said, "We can't make profit through tobacco cultivation though it is harder than watermelon. For this, we stop cultivating tobacco and start growing watermelon." "I have already sold 1,000 pieces of watermelon. Each watermelon is being sold at Tk 300 to 400", he added.  Another watermelon grower from Juraichhari union Palash Chakma said, "I have already sold watermelons for total Tk 75,000. I am expecting to sell watermelons for Tk 2 to 2.5 lac more."
Contacted, Deputy Assistant Agriculture Office Ashish Chakma said, "Many farmers of the upazila are reluctant to cultivate tobacco and are showing more interest in watermelon cultivation."Upazila Nirbahi Officer Jitendra Kumar Nath said, "The upazila administration will continue to provide all out support to watermelon growers in future".
---M Nazim Uddin in Bandarban