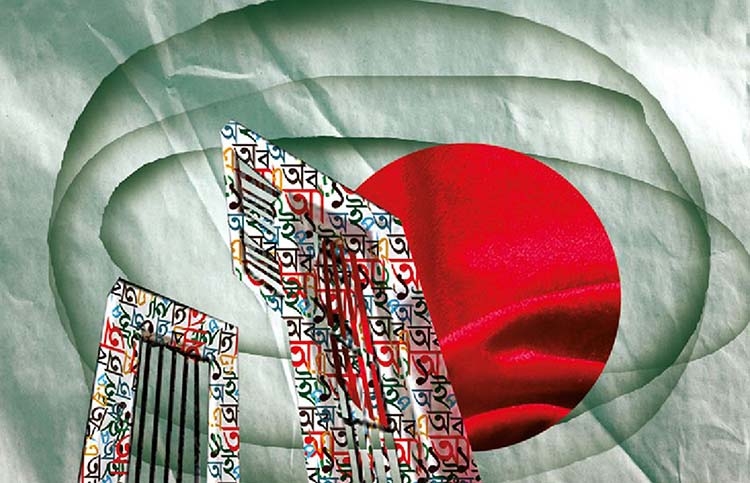 The realities of Ekushey, or around it, need to be focused on again, all these years after 1952. Precisely what happened on the day here in Dhaka is what must be brought back into the public domain, for Ekushey was that single and singular event which opened the path to eventual liberation for the people of East Bengal.Between 1952 and 1971, it was a mere nineteen years. In those years, a whole world changed for Bengalis. Perspectives were transformed, attitudes were reshaped. In plain terms, the Bengalis went back to their roots, reinvented themselves as it were.
The Rubicon was crossed on February 21, 1952. The imposition of Section 144 a day earlier by the provincial government, while it appeared to act as a damper on the spirits of some, by and large acted as a provocation for a majority of students and other young people determined to make their voices heard on the language issue.There was a clear difference of opinion between what could loosely be regarded as pragmatists and radicals on whether or not Section 144 should be violated. On the morning of February 21, beginning early morning, the campus of Dhaka University began to fill with students driven very much by a desire for a showdown, if showdown it had to be, with the authorities.
As the minutes and then the hours ticked away, the presence of students and people from other areas of life increased in number. By 10 a.m. the university area brimmed over with students. Meanwhile, all around the campus stood the security forces, determined to clamp down on any demonstration of what they considered as chaos and disorder. At around 11 a.m., a meeting of the students began at a spot called Amtala.Presided over by GaziulHaq, the meeting did not waste much time in going into the specifics of the situation. As a result of a decision by the All Party State Language Action Committee, ShamsulHaq arrived at the meeting.
He made it clear that Section 144 should not be violated and went into an analysis of why the All Party Committee had reached such a decision. Haq had obviously not anticipated the mood of the students, who were little inclined to give ground on the language issue and seemed ready to take on the authorities by breaking Section 144. However, ShamsulHaq did not appear to be without friends, since some students and student leaders gathered nearby loudly expressed their approval of his stand. As Abdul Matin and Ahmed Rafiq recall the events of the day, Haq, attired in a sherwani and black Jinnah cap, urged restraint on the part of the students. His exhortations were soon to be drowned in a chorus of loud protest by some students.
Haq's speech remained inconclusive. It was at this stage that Abdul Matin, convenor of the University State Language Action Committee, took control and made it clear that if Section 144 was not violated that day, in future no movements could go ahead owing to fear of an imposition of Section 144. He then hurled the rhetorical question at his audience: 'Are we then to retreat because we are afraid of breaking Section 144?' The answer to this question was a resounding 'No' from the students.It may be noted that the principal objective of a violation of Section 144 was a march the students planned to the Legislative Assembly premises, where they would urge the lawmakers to present a forceful case for Bangla in the proceedings of the House. The difficulty they faced, though, was the increasingly high number of policemen on the campus.
The dilemma was obvious: the students had to find a way of breaking through the police cordon and marching on. In the event, it was decided that they would break through the police presence in groups of ten. Within minutes, the procedure was put into practice and just as swiftly the police pounced on them in brutal fashion. Truncheons were used liberally by the law enforcers, which of course led to confusion and panic among the protestors.
And yet the miraculous kept happening: even as the police entered the campus in bigger numbers, the students regrouped, with some actually breaking through the cordon, hoping to make their way to the assembly building. In all the melee, the slogans kept coming from the young: 'Rashtrabhasha Bangla chai', 'cholocholo assembly cholo'. The pitched battles spilled out on the streets. Morning gave way to early afternoon.
Sometime around 3 p.m. the shootings began. The inquiry commission led by Justice Ellis subsequently mentioned the time as having been 3.20, which was around the time the Legislative Assembly was scheduled to meet in session. Four young men were to fall to the fury of the state: AbulBarkat, a student of the MA class at Dhaka University; Abdul Jabbar, a tailor who had come from Gaffargaon, Mymensingh, to tend to a relative in hospital; Rafiquddin Ahmed, then a student at a college in Manikganj; and Abdus Salam, a peon in an office. Salam would succumb to his injuries a few days after February 21, 1952.The bodies of those who died on the day, notes Badruddin Umar, were not handed over to their relatives. They were taken away by the security forces and buried in the nocturnal silence of the night.
East Bengal would never be the same again.


Syed Badrul Ahsan is a senior
journalist and writer.