Bumper yield of turmeric in Rangamati 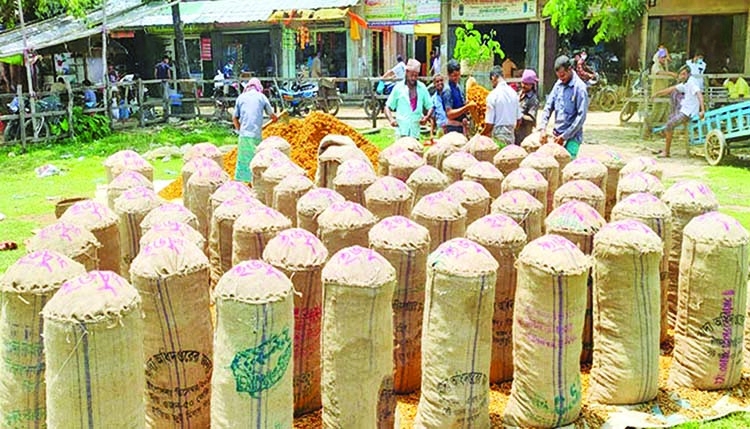 Local turmeric traders are seen processing turmeric at an open field in the upazila collected from different unions to market to Dhaka and Chittagong. -AA
Farmers in Baghaichhari upazila of Rangamati district achieved a bumper harvest of turmeric as the soil of the hill and weather were favorable for turmeric cultivation.  Farmers of the area are financially being benefitted as turmeric cultivation is low-cost.
The demand for turmeric grown in hilly areas is now worldwide. For this reason, it is being exported to different places of the country including Dhaka and Chattogram.According to upazila agriculture office, turmeric is a widely used spice crop. So, it is getting more popularity besides increasing its demand. Turmeric also has many medicinal properties. Turmeric can be cultivated in almost all types of soils.
However, loamy and sandy loam soils are ideal for turmeric cultivation. So farmers are benefiting from the cultivation of turmeric in the hills. There are two improved varieties of turmeric called Dimla and Sinduri. Improved variety of turmeric 'Dimla' gives 3 times higher yield than local variety. Dimla is usually cultivated more in the hills.
Jibon Chakma, a local turmeric grower, said as there is a huge demand demand for turmeric produced in different hills, traders are coming to the hills to buy turmeric. So the farmers are boiling the turmeric collected from the hills and bringing it to the market after drying it in the sun.  Due to underdeveloped communication system and transportation crisis, the hill farmers of the area are not able to market turmeric at the right time.
Md Tofayel Ahmed, plant protection officer at Baghaichhari Agriculture Extension Department, said turmeric has been planted in 2,000 hectares of land in Baghaichhari upazila alone this year. The production target has been set at 40,000 metric tons. Turmeric is a lucrative crop for the highlands. It is possible to solve the price crisis if it is marketed properly, the agriculture official added.During a ground visit, it has been found that local turmeric traders were processing turmeric at an open field in the upazila collected from different unions to market to Dhaka and Chittagong.
While talking to them, they said turmeric worth around Tk 2 crore is traded at four weekly markets in the upazila. However, their profit is not sustainable due to various expenses including transport cost, labor wage, market fund, Hill District Council fund. Upazila Nirbahi Officer Shariful Islam said, "The soil of the hills is gold. If proper arrangements are made for the collection and marketing of agricultural products in a planned way, the economy of the hills and destiny of the people will change overnight."
---M Nazim Uddin in Rangamati