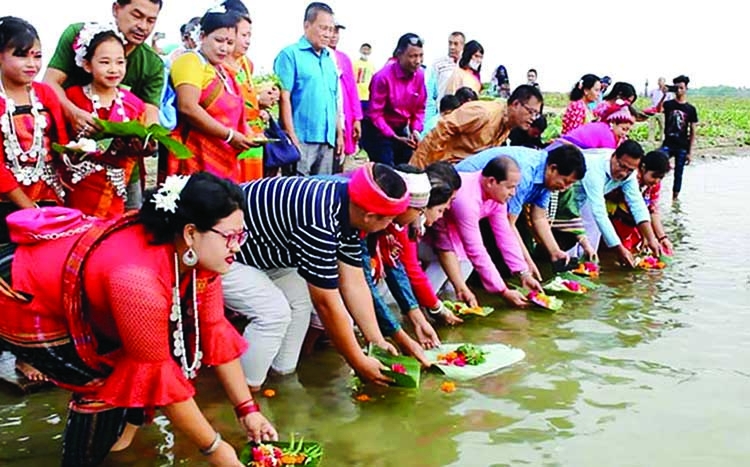 Indigenous people are floating flower at Kaptai Lake on Tuesday marking the Boisabi Utsab in Rangamati. -AA
Boisabi Utsab, the biggest traditional festival of indigenous people in Chittagong Hill Tracts, has begun in Rangamati. The festival is called by different names by several ethnic groups. The Chakma people call it Bizu, Tripura calls Boisu and Marma calls it Sangrai.
The three-day festival marking celebrations of the Bangla New Year began with immersing flowers to Ganga Debi by Rangamati Zila Parishad Chairman Aungsui Pru Chowdhury at Garjontali of the town in the morning.From the morning, hilly men and women including young girls and boys immersed floweres at Kaptai Lake marking the day.
Rangamati Deputy Commissioner Mohammad Mizanur Rahman inaugurated the festival at Rangamati Rajbari Ghat in the early morning. A large number of boys and girls started the festival by floating flowers at the ghat. Addressing the occasion, Intu Moni Chakma, member secretary of Bizu, Boisu and Sangrai Udjapan Committee, said, "We are going to celebrate the festival with full flow this year as there is no Covid restriction."
Rangamati DC Mohammad Mizanur Rahman said, "Though the festival was celebrated at limited for last year, but this year, the festival is being celebrated with a great enthusiasm. This festival brings all communities together which is real beauty of Bangladesh."Speaking the occasion, Rangamati Zila Parishad Chairman Aungsui Pru Chowdhury said, "It is a festival of life for all the communities living in Hill Tracts. The festival strengthens the bond between all the communities of the area."
For Chakmas, the first day celebration starts with Ful Biju. At the Ful bizu Chakma people get up early, clean their houses, decorate them with flowers, and float flowers in rivers, canals and springs to seek blessings from the god of peace and prosperity. Then in the evening, they go to Buddhist temples and light candles.
The second day is called Mulbiju. This day they cook a kind of popular item, a specialty of the indigenous people, called "Pajon". It's is cooked by different items collected from the jungle. And the last day, known as "Goijja Pojjya Din", is spent by taking rest and going to monasteries for prayers to live happily throughout the new year.
During the festival, different ethnic events, including Chakma dance, Marma Chata Nach, Pani Khela and Tripura Goraiya dance etc are held to celebrate the programme highlighting their distinctive cultural features.The festival will be concluded with a water festival, one of the most popular events of Marma community during the season, on April 16.
---M Nazim Uddin in Rangamati