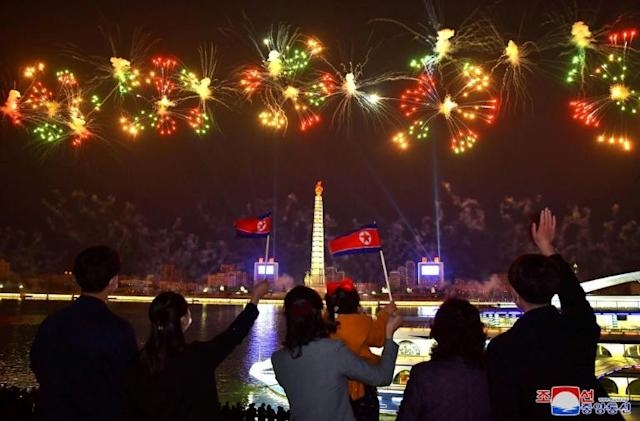 Kim Jong Un oversaw a huge public
procession to celebrate the birthday of North Korea's founding leader, state
media images showed Saturday, but the anniversary passed without an
anticipated show of military strength.
Known as the Day of the Sun in the nuclear-armed country, the April 15
birthday of the late Kim Il Sung -- grandfather of current leader Kim Jong Un
-- is one of the most important dates in Pyongyang's political calendar.
Analysts and South Korean and US officials had widely predicted a military
parade or even a nuclear test, but the celebrations Friday involved a
civilian parade, synchronised dancing and fireworks.
Photographs released by the state-run Korean Central News Agency showed
thousands of colourfully dressed people marching through the capital's Kim Il
Sung Square as Kim Jong Un looked on from a balcony.
"Columns of workers, peasant dancers and others marched past the square,"
carrying banners and boards bearing socialist slogans, and a giant national
flag, KCNA said.
Three generations of the Kim family have ruled the country since 1948.
Kim also visited the Kumsusan Palace of the Sun, where the bodies of Kim
Il Sung and his son and successor Kim Jong Il lie in state.