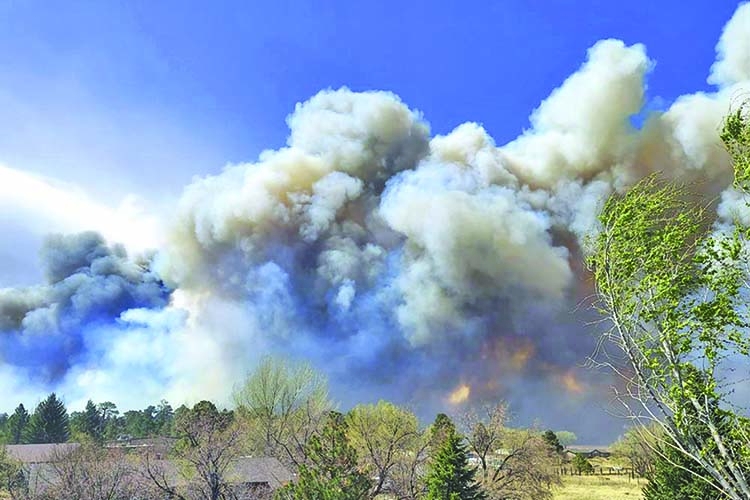 Smoke from a wind-whipped wildfire rises above neighborhoods on the outskirts of Flagstaff, Ariz., on Tuesday, April 19, 2022. -AP
AA International Desk
Heavy winds kicked up a towering wall of flames outside a northern Arizona tourist town Tuesday, ripping through two-dozen structures and sending residents of more than 700 homes scrambling to flee. Flames as high as 100 feet (30 meters) raced through an area of scattered homes, dry grass and Ponderosa pine trees on the outskirts of Flagstaff as wind gusts of up to 50 mph (80 kph) pushed the blaze over a major highway. Coconino County officials said during an evening news conference that 766 homes and 1,000 animals had been evacuated. About 250 structures remained threatened in the area popular with hikers and off-road vehicle users and where astronauts have trained amid volcanic cinder pits. The county declared an emergency after the wildfire ballooned from 100 acres (40 hectares) Tuesday morning to over 9 square miles (23 square kilometers) by evening, and ash rained from the sky. The fire was moving northeast away from the more heavily populated areas of Flagstaff, home to Northern Arizona University, and toward Sunset Crater Volcano National Monument, said Coconino National Forest spokesman Brady Smith.

"It's good in that it's not headed toward a very populated area, and it's headed toward less fuel," Smith said. "But depending on the intensity of the fire, fire can still move across cinders."
Authorities won't be able to determine whether anyone was injured in the wildfire until the flames subside. Firefighters and law enforcement officers went door to door telling people to evacuate but had to pull out to avoid getting boxed in, said Coconino County Sheriff Jim Driscoll.
He said his office got a call about a man who was trapped inside his house, but firefighters couldn't get to him.
"We don't know if he made it out or not," Driscoll said.
Various organizations worked to set up shelters for evacuees and animals, including goats and horses.