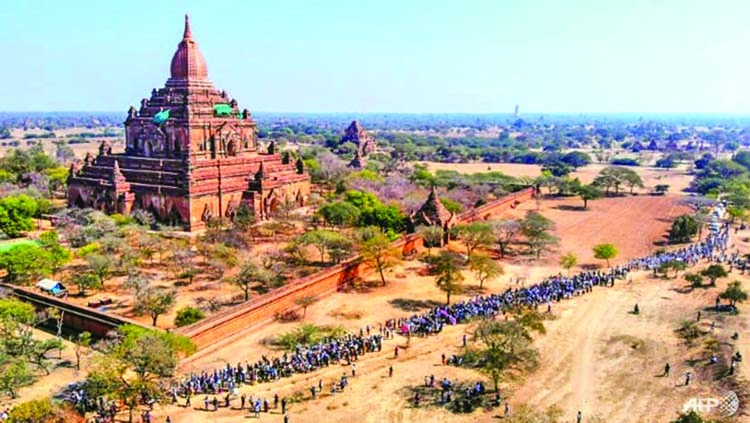 Anti-coup protesters demonstrate last year against the military in Bagan, a UNESCO World Heritage site in Myanmar. -AFP
Myanmar's junta will allow tourists to apply for visas after a break of more than two years, state media said Thursday (May 12), sparking calls by an activist group for foreign travelers to stay away. The country closed its borders to visitors in March 2020 at the beginning of the corona virus pandemic in an attempt to prevent infections rising.
It was further isolated after the army toppled the civilian government of Aung San Suu Kyi in February 2021, prompting huge protests and a bloody military crackdown on dissent. "With an aim to develop the tourism sector ... e-Visa (Tourist) applications will be allowed and accepted from May 15, 2022," said a notice in the Global New Light of Myanmar. It did not give details on when the first visitors could be expected to arrive. Activist groups warn that the military's vested interests in swathes of the economy - including mines, banks, petroleum, agriculture and tourism - mean tourist dollars will likely end up in the junta's coffers. "Even if foreign visitors avoid hotels and transport owned by the Myanmar military and their associates, they will still fund the junta through visa fees, insurance and tax," said activist group Justice for Myanmar.

"We call on anyone considering a holiday in Myanmar to boycott."
After democracy was established in 2011 following decades of military rule, Myanmar opened up to tourists, becoming popular with travelers seeking an exotic destination away from the well-trodden backpacker haunts of Southeast Asia.
But the tourism sector was battered by the pandemic, with the country registering 40,000 daily COVID-19 cases at its peak last year. It has recorded almost 20,000 deaths in total.
Clashes between anti-coup fighters and security forces following the military takeover, including in the main cities of Yangon and Mandalay, have also dented business, with many international firms pulling out of the nation.