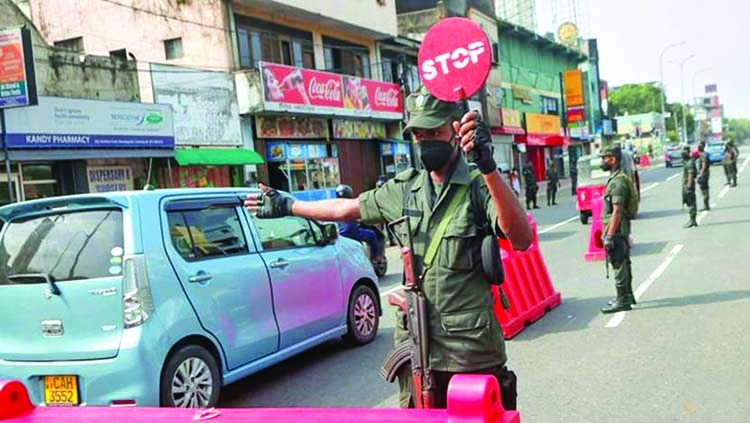 An army member stops vehicles at a check point on a the main road after the curfew was extended for another extra day following a clash between Anti-government demonstrators and Sri Lanka's ruling party supporters, May 11, 2022. -Reuters
Many Sri Lankans thronged buses in the main city Colombo on Thursday (May 12) to return to their hometowns with leaders of political parties due to meet after the prime minister quit and went into hiding and President Gotabaya Rajapaksa warned of anarchy.
The island nation off India's southern tip, which overlooks shipping routes between Europe and Asia, is battling its worst economic crisis since independence.
Violence erupted on Monday after supporters of former Prime Minister Mahinda Rajapaksa, the president's elder brother, attacked an anti-government protest camp in Colombo.
Days of violent reprisals against government figures aligned to the powerful Rajapaksa clan followed.
The army was called out to patrol the streets and police said nine people were killed and more than 300 injured in the clashes.
Hundreds of people thronged the main bus station in the commercial capital after authorities lifted an indefinite curfew at 7am local time on Thursday. The curfew will be reemployed at 2pm.
Streets in Colombo were quiet, with some people venturing out to buy essential supplies.
Frustration remained at ongoing fuel shortages that have crippled the country's economy.
"We have hit the bottom economically," said Nimal Jayantha, an autorickshaw driver queuing for petrol after the curfew was lifted.
"I don't have the time do my job. By the time I stay in the fuel queue and get petrol, curfew will be imposed. I will have to go home without any money."
Protesters have sprayed graffiti over Mahinda Rajapaksa's home in a southern town and ransacked a museum dedicated to his father. They have vowed to keep up the protests until the president also quits.