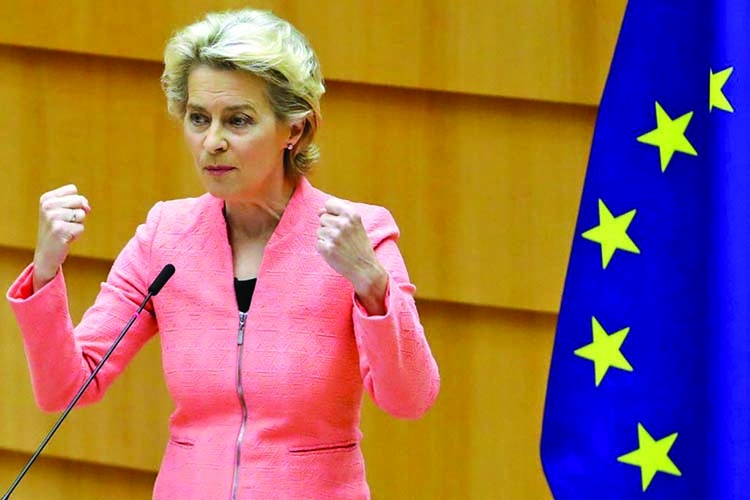 European Commission President Ursula von der Leyen on Thursday termed Russia's invasion of Ukraine the "most direct threat" to the world order. She also spoke about Russia's "worrying" pact with China. The commission President made the remarks in Tokyo where the top EU officials have gone for an annual round of talks. The talks come amid Russia's invasion of Ukraine which is nearing three months, with most of the West rallying against Moscow and urging it to exercise restraint in Ukraine, Hindustan Times reports.
Russia "is today the most direct threat to the world order with the barbaric war against Ukraine, and its worrying pact with China", news agency AFP quoted her as saying after her meeting with Japanese Prime Minister Fumio Kishida along with European Council President Charles Michel.
The Japanese PM - whose government has joined the West in imposing tough sanctions on Moscow, including on energy - said, "Russia's invasion of Ukraine is not just a matter for Europe, but it shakes the core of the international order including Asia. This must not be tolerated."
On Beijing's increasing muscular stance in Asia which was also on the agenda, Charles Michel said, "Our cooperation in Ukraine is critical in Europe, but it's also important in the Indo-Pacific and we also want to deepen our consultation on a more assertive China."
"We believe that China must stand up to defend the multilateral system that it has benefitted from in developing its country."
Tokyo recently joined the European Union and Group of Seven nations in imposing trade sanctions on Russia, cramping Moscow's ability to export its oil and gas. This came even as Japan's strong dependence on energy imports, including purchases from Russia.
Last week Kishida said Japan would "in principle" ban Russian oil but it has been more reluctant to disengage from some projects.
Russia's war on Ukraine which it has termed "special military operations" is nearing three months and has invited severe sanctions from the West in a bid to stop Moscow from any further escalation on the East European country- where lakhs of people have fled to escape the worsening conditions.