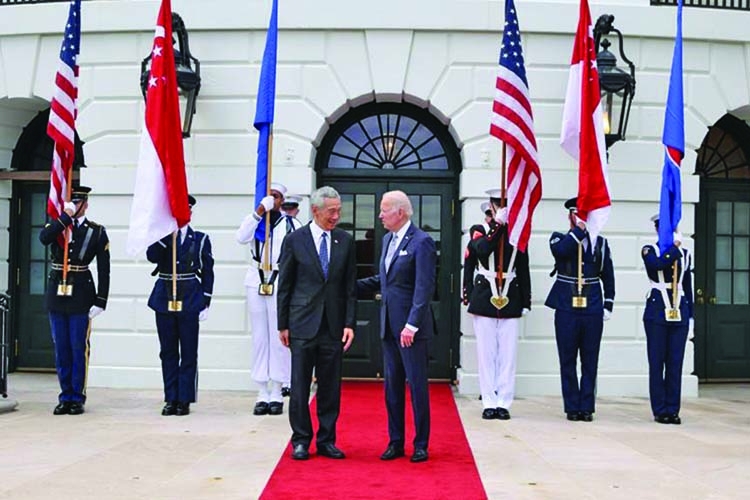 Singapore welcomes the United States' proposed economic plan for the Indo-Pacific and encourages greater Asean participation in it, Prime Minister Lee Hsien Loong told top US officials and American business leaders in Washington on Thursday (May 12). "It needs to be inclusive and provide tangible benefits to encourage wider participation, and it should cover cooperation in areas like digital and green economies and infrastructure because these issues will resonate strongly in the region," PM Lee said of the Indo-Pacific Economic Framework (IPEF), America's upcoming strategy for economic engagement with the region, Strait Times reports.
"We encourage greater Asean participation in the IPEF and we hope the US will directly invite and engage Asean member states in this endeavour," he added.
The framework has not been formally launched yet, but is likely to be unveiled around President Joe Biden's visit to Japan and South Korea later this month, Tokyo's ambassador to the US said this week.
While few details have been released so far, the Biden administration has signalled that the framework will not be a traditional trade deal and will not include increased market access, a key interest of many Asean economies.
Instead, the IPEF will feature the four "pillars" of clean energy, supply chains, anti-corruption, and fair and resilient trade.
On Thursday, PM Lee said he hoped the IPEF would cover the areas of digital trade, trade facilitation and supply chain resilience, and capacity building.
Digital trade can harness Asean's growing digital potential, for instance, by facilitating cross-border data flows and taking advantage of Asean's ongoing work on digital trade standards, he said.

Singapore also welcomes cooperation between the US and Asean to build digital capabilities, and to strengthen regional connectivity and logistics infrastructure, PM Lee said.
Singapore also supports regional human capital development, including through the US-Singapore Third Country Training Programme, which was renewed in September last year, he added.
Other Asean leaders voiced similar views at the event, which was organized by the US-Asean Business Council and the US Chamber of Commerce, ahead of the Asean-US Special Summit.
The US was represented by Secretary of Commerce Gina Raimondo and US Trade Representative Katherine Tai, who are jointly negotiating the IPEF, as well as by climate envoy John Kerry and other top officials.
Earlier on Thursday, PM Lee and other Asean leaders were hosted to a bipartisan working lunch with congressional leaders by US Speaker of the House Nancy Pelosi.
Both sides exchanged views on global and regional issues, as well as the future of Asean-US cooperation, said PM Lee's press secretary Chang Li Lin.
"PM Lee encouraged members of Congress to continue supporting the Asean-US agenda, especially on trade and investment in the region, and for Asean and the US to continue exploring collaboration in new and mutually beneficial areas," Ms Chang said in a statement.
In a show of bipartisan support for the regional bloc, a group of Democrat and Republican lawmakers also introduced a resolution reaffirming the commitment of the US to remain a strong, reliable and active partner to Asean.
The resolution, introduced on Wednesday in the US House of Representatives, highlights the strength of the political, economic, security and people-to-people ties between America and Asean.

It also calls on the Biden administration to promptly nominate a qualified individual to serve as the ambassador to Asean to facilitate diplomatic engagement with Asean countries, and to maintain continued commitment to high-level representation at the East Asia Summit and other Asean forums.