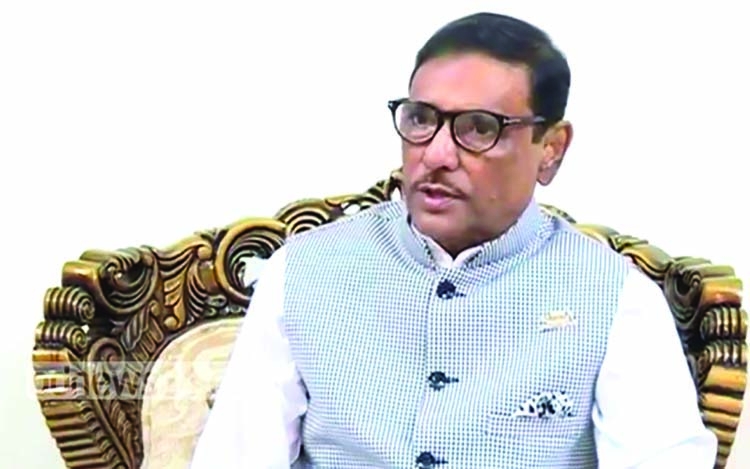 Awami League (AL) General Secretary Obaidul Quader on Friday said as long as Bangladesh is run by the AL government, led by Prime Minister Sheikh Hasina, the life and livelihoods of its people will remain safe.
"Bangladesh will never be like Sri Lanka, Pakistan or Afghanistan. As long as the country is run under the leadership of the AL and Sheikh Hasina, the lives of the country's people will remain safe," he said in a statement, BSS reports.
Quader, also the road transport and bridges minister, said AL President Sheikh Hasina is now recognised as a successful leader across the globe due to her honesty, proficiency, courage, firmness and patriotism.
Resisting all the intrigues of the anti-liberation forces, Bangladesh is marching towards development, advancement, peace and prosperity at an indomitable pace under the skilled and visionary leadership of Sheikh Hasina, he said.
The AL general secretary said capitalizing on the ongoing political and economic crisis of Sri Lanka, an identified quarter is now involved in propaganda to create panic among the country's people by spreading provocative falsehood and rumors.
"Particularly, the anti-liberation forces BNP and its allies are hatching a conspiracy of ill-politics to fish in troubled water," he said.
He said some so-called media and research agencies funded with foreign aids are trying to create an artificial crisis in the politics of Bangladesh by creating imaginary and unrealistic stories.
"We want to say firmly that Bangladesh Awami League is the most popular and oldest political party in this land. The people of the country are the main base and driving force of this organization formed under the leadership of the best Bangalee of all times, Father of the Nation Bangabandhu Sheikh Mujibur Rahman," Quader said.
About the falsehood of the BNP, he said BNP secretary general Mirza Fakhrul Islam Alamgir continues lying shamelessly and the media are publishing their false statements without verifying those.
The AL general secretary said the BNP, which was born through dictatorship and seizure of power illegally, destroyed the spirit of the great Liberation War times and again since its inception.
But, he said, today the party is cheating and joking with the nation in the name of celebration of the golden jubilee of the country's independence.
Quader said the words of the spirit of liberation war do not match the people, like Mirza Fakhrul, who try to make someone the first woman freedom fighter and child freedom fighter after 50 years of the independence and put the identified war criminals, razakars and al-badrs in the seat of the highest honor and the state power.
Due to these misdeeds, the BNP repeatedly was forced out of the state power amid public outrages, he said.
The road transport and bridges minister said staying in different parts of the world, the people who fled the country on undertakings of quitting politics and were convicted in court are today making various plots against the Bangladesh government and the Bangabandhu family with the black money amused through corruption.