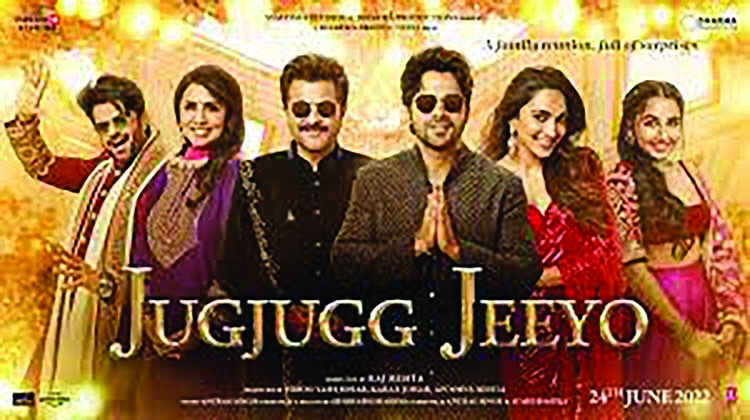 The team of Jug Jugg Jeeyo had gotten everyone excited and jumping with joy ever since they announced that the trailer will be dropping soon. Well, before the trailer comes, the makers have released the first poster of the film. It is quite a unique poster launch as the fans across India will be releasing the first poster. The poster featuring Kiara Advani, Varun Dhawan, Neetu Kapoor, and Anil Kapoor will surely get a smile on your face.
Dharma Productions took to their Twitter handle to share the motion poster of Jug Jugg Jeeyo. The video consists of 3 posters featuring Kiara Advani, Varun Dhawan, Neetu Kapoor and Anil Kapoor.
They are all dressed in white. In the first picture, we can see them seated together. Kiara stuns in a white lehenga, Neetu looks gorgeous in a white salwar kameez and Anil and Varun look dapper in white kurta pyjama. They can be seen laughing and clapping in the next picture followed by a couple of more pictures. Even Neetu Kapoor took to her Instagram handle to share the posters that also feature Prajakta Koli and Maniesh Paul. Sharing the poster, Neetu wrote, "Come and experience the magic of my family in cinemas near you on 24th June, till then #JugJuggJeeyo!"
Talking about Jug Jugg Jeeyo, a source had said, "It's a tale of two couples from different generations, entangled around the issues post marriage.
The premise beautifully merges the generation gap and puts out a unique point about love, but with ample of humour. Though the key characters of both the films are two couples, the treatment and the story is in a complete different space. Jug Jugg Jeeyo is more about families, and the bond a married son with his father and mother played Anil and Neetu."  To note, Jug Jugg Jeeyo will mark Kiara's first collaboration with Varun. Jug Jugg Jeeyo is slated to release on June 24 this year.