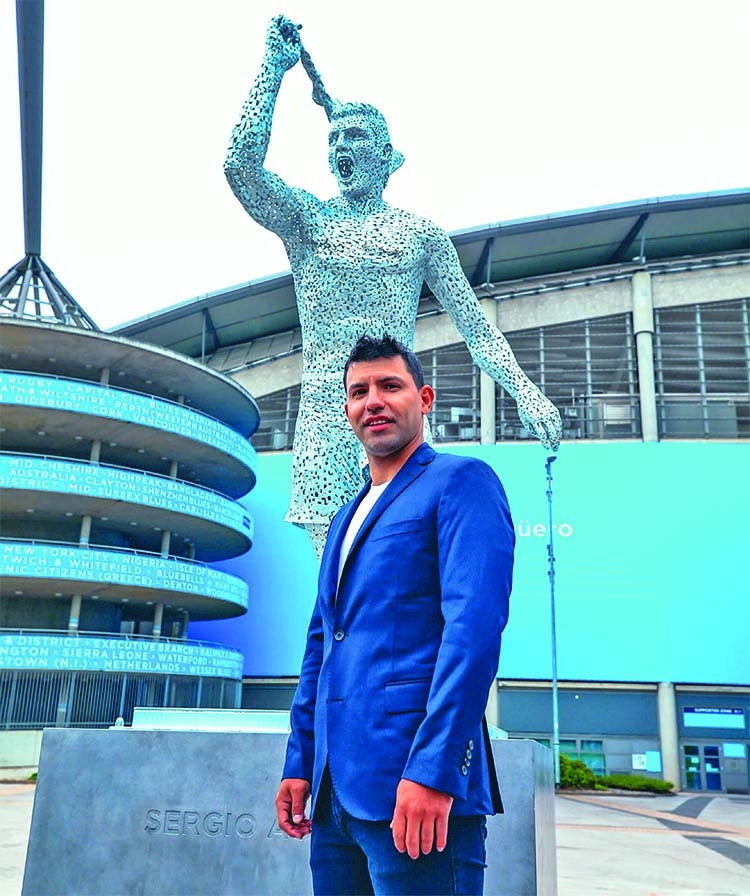 Manchester City legend Sergio Aguero says the new statue of him to mark the 10th anniversary of the club's first Premier League title captures the "best moment of my life".
The statue, unveiled at the Etihad Stadium, celebrates Aguero's goal in the fourth minute of injury time in the final game of the 2011-12 season.
The goal won City their first Premier League title of the Abu Dhabi era. "It was the best moment of my life," said Aguero. "For me that moment changed my life, changed the club and everything. That moment always will be in my heart."
Created by sculptor Andy Scott, the galvanised steel statue of Argentine Aguero was revealed on Friday and joins statues of fellow City legends Vincent Kompany and David Silva on the east side of the Etihad.
City chairman Khaldoon al-Mubarak said Aguero's goal against QPR in 2012, which denied rivals Manchester United from winning the title, "changed everything". "Khaldoon said the truth," Aguero responded. "We don't know what would have happened if we'd lost the Premier League that year.
"That year changed everything because the next years we started winning more titles."
The striker won 15 major trophies in 10 years with City and is the fourth-highest scoring player in Premier League history with an impressive 184 goals in 275 games.
Sculptor Scott said: "It has been an honour to work on a project that means so much to Manchester City fans around the world in celebration of such an important player in the life of this football club."Aguero, 33, left City last summer for a spell at Barcelona, which was cut short after the Argentine was diagnosed with a heart condition that forced his retirement.
--- BBC