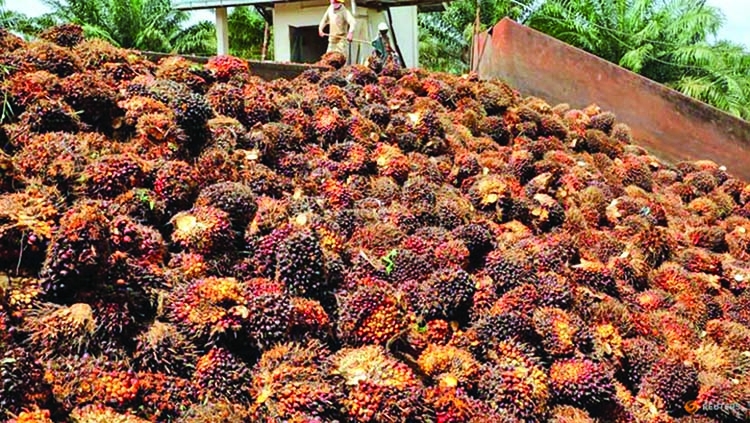 Workers handle palm oil fruits at an oil palm plantation in Slim River, Malaysia Aug 12, 2021. -Reuters
Hundreds of Indonesian smallholder farmers on Tuesday (May 17) staged a protest in the capital Jakarta and in other parts of the world's fourth most populous country, demanding the government end a palm oil export ban that has slashed their income.
Indonesia, the world's top palm oil exporter, on Apr 28 halted shipments of crude palm oil and some of its derivative products to control soaring prices of domestic cooking oil, rattling global vegetable oil markets. However, government efforts to make cooking oil, a household staple for many Indonesian dishes, more affordable have failed, undermining the approval rating of President Joko Widodo and prompting the farmers' backlash.
"Malaysian farmers are wearing full smiles, Indonesian farmers suffer," one of the signs held up by protesters read. Malaysia is the second-largest producer of palm oil and aims to fill the market gap opened by Indonesia's export ban.
Marching next to a truck filled with palm oil fruit, farmers held a rally outside the offices of the Coordinating Ministry of Economic Affairs, which is leading the government policy. In a statement, the smallholder farmers' group APKASINDO said since the export ban the price of palm fruit had dropped 70 per cent below a floor price set by regional authorities.
Independent farmers are not protected by the floor price, which is fixed through an agreement between mills and large-scale cooperatives.

APKASINDO estimates at least 25 per cent of palm oil mills have stopped buying palm fruit from independent farmers since the ban started. This indicates that storage tanks are filling up at mills, said Albertus Wawan, a farmer from West Kalimantan province, by telephone.
Similar protests by farmers were also planned in 22 other provinces, APKASINDO said.