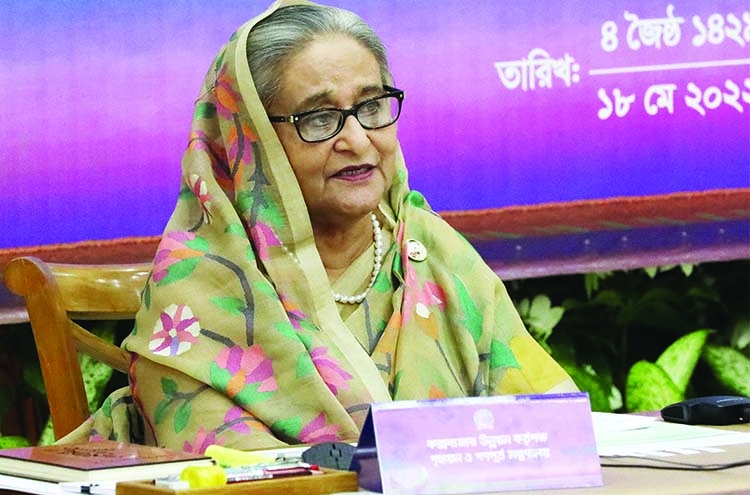 Prime Minister Sheikh Hasina has called for maintaining the natural beauty of Bangladesh while still ensuring ample amenities for tourists. "If we look at Bangladesh, we have a beautiful land with greenery, hills and a maritime border - a land gifted by the Father of the Nation Bangabandhu Sheikh Mujibur Rahman. We need to develop it to be more attractive to tourists, while also maintaining the natural environment," she said as she inaugurated the newly constructed multi-storied building of Cox's Bazar Development Authority via video conferencing, bdnews24 reports.
Though the Covid-19 pandemic battered the tourism business, it was a boon for the nature and biodiversity in Cox's Bazar as the crowd thinned, Hasina said.
"It had a positive impact. As there were no tourists, some animals like the red crab and dolphin re-appeared in Cox's Bazar. The turtles, which had almost lost their breeding grounds, got them back." Hasina mentioned she had given a directive to the chairman of Cox's Bazar Development Authority to put a fence around the habitats of red crabs and turtle breeding grounds. She thanked the authorities for implementing some of those tasks. "We must ensure amenities for the tourists but not at the cost of natural beauty."
The prime minister also shared her childhood memories of running after red crabs at the seashore. "They were too smart and just slipped inside the holes on the ground before I could catch them. These are fond memories never to be forgotten!" Cox's Bazar must be developed as a tourist city, but people should not construct any unplanned structures there, said Sheikh Hasina. She also highlighted her government's efforts and planning to further develop the city.
The government has instructed the formation of a 'masterplan' to revamp the entire city, she said."We want Cox's Bazar to be developed in a planned manner, not in a haphazard way. We can use the vast maritime border to create more attractions for international tourists. We want to take that initiative."
After the devastating cyclone in 1991, many people who lived in Cox's Bazar's slums lost their homes. The government constructed multi-storied buildings for those affected by climate change in Khurushkul.The prime minister also shared the government's plan to set up a modern, eye-catching dry fish market for fishermen in Cox's Bazar.
The Awami League government has also arranged loans for salt farmers, the first of its kind, she said.
"The demand for salt will never drop. Foreign countries use non-refined salt to melt ice. We can even export salt if there's enough production."She urged officials to focus on modernization and the use of technology in salt farming. Also, they should ensure the development of salt farmers, she said.The prime minister suggested planting more trees at the beach to protect it from storms and tidal surges.
"The Father of the Nation Bangabandhu Sheikh Mujibur Rahman drew the Maritime Act in 1974. Those who usurped power after killing him never focused on the issue of Bangladesh's right to a maritime border. They never showed any effort to realise this right."The Awami League government has upheld Bangladesh's right to its maritime border, said Sheikh Hasina."Now we want to use our maritime resources to contribute to the national economy. That's why we adopted the Blue Economy to propel growth."