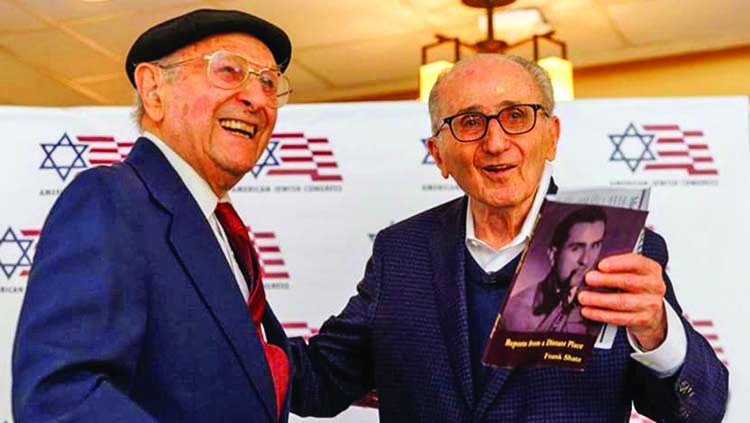 Holocaust survivors Dr. George Berci (right), 101, and Frank Shatz, 96, in Los Angeles, California on May 18, 2022. -Reuters
George Berci and Frank Shatz could have crossed paths in a Nazi labor camp or working in the Hungarian underground nearly 80 years ago. But as far as they know the two Holocaust survivors met for the first time on Wednesday (May 18) in Los Angeles.
Berci, 101, is a pioneering Los Angeles surgeon who still reports to work in a white coat at Cedars-Sinai Medical Center.
Shatz, 96, is an author who still writes a column for the Virginia Gazette. Native Hungarians, they both escaped a Nazi labor camp and later achieved prominence in their respective fields in the United States. The American Jewish Congress organized their meeting.
The two men exchanged wide smiles as they met at Berci's nursing home. As Berci waited, Shatz strode toward him, walking briskly with a cane, and they hugged.
"We escaped almost the same day from the slave labor camp and we found ourselves in Budapest and we both joined the anti-Nazi underground," Shatz said. "We were in the same place, did the same job, so most probably our paths passed a few times." Berci has said he was a captive of the Nazis in the summer of 1944 when he escaped at age 23 thanks to a nearby allied attack that distracted his guards.
He then joined the Hungarian underground in Budapest. Shatz wrote in a recent column he was a slave labourer in the Carpathian Mountains building a railroad for the German army and escaped during an aerial bombardment. He, too, joined the anti-Nazi underground in Budapest. Shatz learned of Berci's story from a recent profile of the doctor in the Los Angeles Times, leading to the meeting.