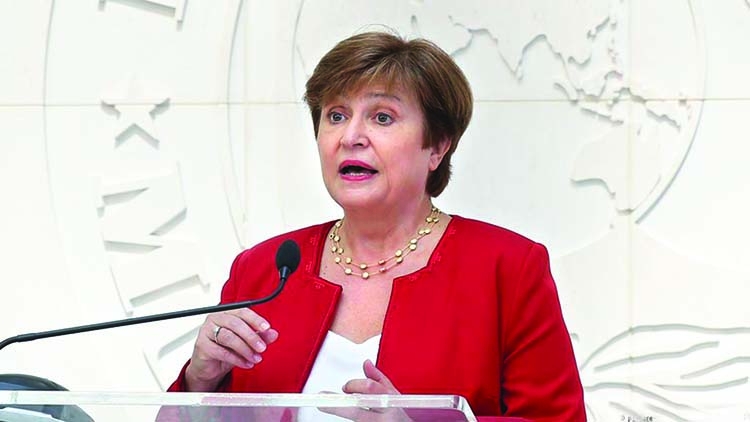 Global finance leaders should prepare for multiple inflationary shocks, the head of the International Monetary Fund has warned, as fears of a global economic downturn continue to hit markets around the world.
The IMF's managing director, Kristalina Georgieva, said it is becoming harder for central banks to bring down inflation without causing recessions.
Speaking at the sidelines of a meeting of G7 finance ministers and central bank chiefs in Germany, Georgieva cited mounting pressures on energy and food prices from Russia's war in Ukraine, supply chain disruption and cost pressures caused by China's zero-Covid policies, the Guardian reports.
"I think what we need to start getting more comfortable with is, that may not be the last shock," Georgieva said, adding that the outbreak of the Omicron coronavirus variant late last year had shown that inflation would not be a "transitory" one time shock. Inflation has risen to its highest level in about 40 years in both the UK and the US this year, and is the highest it's been in the eurozone since statistics began in 1997.
Investors fear that central banks risk a "hard landing", pushing economies into recession, as they raise interest rates to bring inflation down towards target.
London's stock market tumbled into the red on Thursday, with the FTSE 100 index down 146 points or 2% in afternoon trading at 7,292.The pan-European Stoxx 600 index was down 1.3% with personal care companies, food and beverage companies, tech stocks and retailers all weakening.
Wall Street opened lower, a day after its worst selloff in nearly two years, as major retailers reported that rising inflation was hitting consumer spending and eating into their profit margins.US department store chain Kohl's slashed its profit and sales outlook, echoing Target and Walmart earlier this week.

US jobless claims rose for the third week in a row, with 218,000 Americans seeking unemployment support last week. A survey of manufacturers in the Philadelphia region showed that growth almost stalled this month, as rising costs hit factories.
"The reality is no matter which way your turn, warnings signs are flashing," said Fiona Cincotta, senior financial markets analyst at City Index.Inflation hit confidence at UK factories too, where investment plans remained weak, according to the latest industrial trends reports from business body the CBI. The number of manufacturers planning to lift their own prices remained near a record high.
The Federal Reserve chair, Jerome Powell, has indicated that the US central bank will raise interest rates by 50 basis points in June and July, in its determination to pull US inflation down from 8.3% in April. That has driven up fears of a global slowdown.Joost van Leenders, senior investment strategist at wealth manager Van Lanschot Kempen, cautioned that the Fed wasn't usually able to achieve a soft landing.
"A recession is usually necessary to quash inflation. There is a slightly greater chance of a soft landing though if there are no major imbalances in the economy, especially if families and businesses don't hold finance deficits. And, as it happens, that's exactly the situation we're in at the moment. A positive outcome is therefore possible, although the Fed has its work cut out," Van Leenders said.