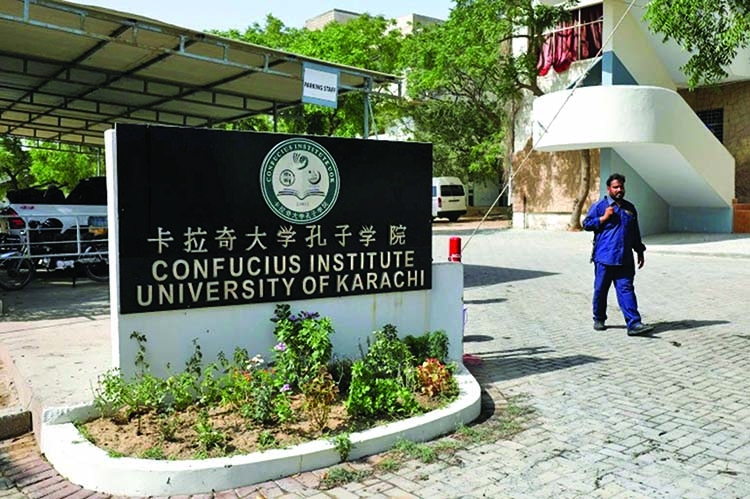 On 26 April, Pakistan's first female suicide bomber killed three Chinese teachers and the driver of the minibus they were travelling in as she blew herself up in front of the Confucius Institute at the University of Karachi.
The impacts have been felt far and wide. Chinese teachers working at the cultural and educational institutions have now left Pakistan, and in the restive province of Balochistan female activists are facing greater pressures, with three reported abductions this week, the Guardian reports.The attack was claimed by the Balochistan Liberation Army (BLA), a banned secular militant group that has accused Pakistan and China of exploiting the resources of the south-western province for which it wants independence.
The bomber was identified as Shari Baloch, from Kech, Balochistan, a teacher who held a postgraduate degree in zoology. It was a dramatic shift in the nature of Baloch militancy.It raised one main question from analysts: Shari Baloch came from an affluent and educated family, none of whom had been killed or gone missing in the crackdown on the insurgency. What pushed her to go to kill herself and others?
Her brother said she never spoke anything of the insurgency or joining militancy. "None of us could imagine she would take such a step, it was shocking for us," he said. "Shari never shared such extremist thoughts or ideologies with us. She was the happiest sister among all."Baloch women have been leading a peaceful protest movement against the extrajudicial killing and abduction of their male family members but had not taken part in the separatist insurgency started in early 2000s.
People suspected of being an insurgent or a sympathiser, including political workers, students and activists, were abducted and sometimes tortured and murdered. According to the Voice for Baloch Missing Persons (VBMP), more than 5,000 people have gone missing since 2000.Activists and family members have accused security agencies of the abductions and extrajudicial killings but the security agencies have denied any involvement.
After the Karachi attack, the bomber's husband, Dr Haibatan Bashir, a dentist, went into hiding with his two children. He said he had known of his wife's plan. "Shari informed me around two years ago about her decision. There are multiple factors behind her decision," he told the Guardian.
She chose "Bramsh" as her alias, the name of a four-year-old child whose mother was killed by a private militia in 2020. Two other deaths in 2020 - those of Hayat Baloch, a student killed in Karachi by a Frontier Corps soldier, and Karima Baloch, a political worker who mysteriously died in exile in Canada and was buried in her home town under a curfew - had a deep impact on her.
When Shari Baloch learned of Karima Baloch's death, she called her husband. "I remember she was very upset. She told me that the enemy cannot even accept peaceful methods of politics," he said.
These incidents started a wave of protests against the state and the security forces. "She believed people in Balochistan were living under oppression," Bashir said. His wife used to say that "innocent Baloch are killed and abducted and these brutalities will reach our family if we do nothing", he said.
A close friend of Shari Baloch told the Guardian that Shari had once said to her that "our men are humiliated, tortured and abducted. I wish we had died before witnessing such humiliations."
China expressed "its strong condemnation and great indignation at this major terrorist attack" after the bombing. The dead were the Karachi institute's director and two other faculty members.The Pakistani prime minister, Shahbaz Sharif, wrote in a handwritten letter to the Chinese embassy that "we won't rest until the culprits are hunted down and given exemplary punishment".
Baloch women have been the face of peaceful political movements for many years but now they fear they will be abducted like their male relatives.Noor Jahan, 40, was picked up from her home in Kech, Balochistan, by counter-terrorism police on Monday. The police claimed she was planning an attack and said they recovered a cache of weapons from her. The police report, which the Guardian has seen, claims she is affiliated with the BLA.Hundreds of men and women blocked a main road in Kech and refused to move until Jahan was released. Her whereabouts are still unknown.
On Thursday it was reported that Habiba Pir Mohammad, a poet, had been abducted in Karachi by security forces during an early morning raid.Sammi Deen Baloch, who has been campaigning for the release of her father, Dr Deen Mohammed, who has been missing since 2009, said Shari Baloch's attack had provided an excuse for the state to start picking up women, missing persons' families and peaceful protesters and registering fake cases against them.
"We have nothing to do with violence and we don't support it. We just demand an end to enforced disappearances and for suspects to be treated according to law by presenting them in courts," she said.Zafar Musyani, a researcher on Balochistan, said the detention of Jahan showed that this kind of trend was in the offing. "Before Shari Baloch, state authorities couldn't profile or portray a Baloch woman as an insurgent. Now they have got a precedent set by Shari to support any crackdown on Baloch women by labelling them as insurgents."