Over 1,700 surrender in Mariupol: Russia 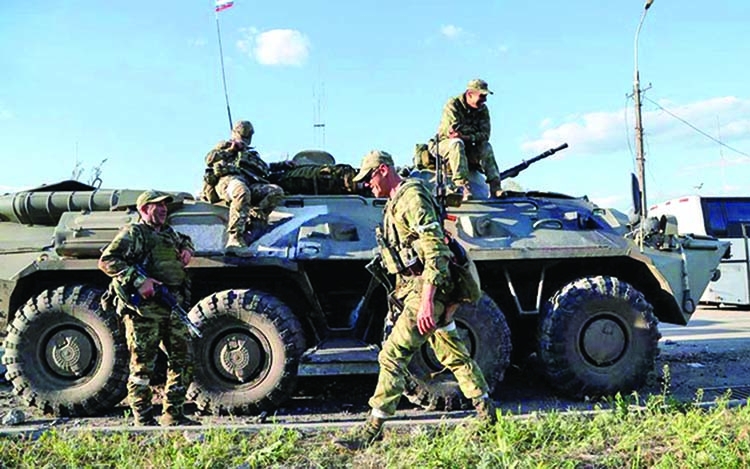 Moscow said on Thursday that 1,730 Ukrainian fighters had surrendered in Mariupol over three days, including 771 in the past 24 hours, claiming a surrender on a far bigger scale than Kyiv has acknowledged since ordering its garrison to stand down.
The ultimate outcome of Europe's bloodiest battle for decades remained publicly unresolved, with no confirmation of the fate of the hundreds of Ukrainian troops who had held out in a vast steelworks at the end of a near three-month siege, Reuters reports.
Ukraine, which says it aims to secure a prisoner swap, has declined to say how many were inside the plant or comment on the fate of the rest since confirming that just over 250 had surrendered in the initial hours after it ordered them to yield. The leader of Russian-backed separatists in control of the area said nearly half of the fighters remained inside the steelworks, where underground bunkers and tunnels had protected them from weeks of Russian bombardment.
"More than a half have already left - more than half have laid down their arms," Denis Pushilin told the Solovyov Live internet television channel. "Let them surrender, let them live, let them honestly face the charges for all their crimes."
The wounded had been given medical treatment while those who were fit had been taken to a penal colony and were being treated well, he said. Ukrainian officials say they cannot comment publicly on the fate of the fighters, as negotiations are under way behind the scenes to rescue them.
"The state is making utmost efforts to carry out the rescue of our service personnel," military spokesman Oleksandr Motuzaynik told a news conference. "Any information to the public could endanger that process."
Russia denies that it has agreed to a prisoner swap for them. Many of the Azovstal defenders belong to a Ukrainian unit with far-right origins, the Azov Regiment, which Moscow calls Nazis and says must be prosecuted for crimes. Ukraine calls them national heroes.
The end of fighting in Mariupol, the biggest city Russia has captured so far, allows Russian President Vladimir Putin to claim a rare victory in the invasion it began on Feb 24. It gives Russia complete control of the Sea of Azov and an unbroken stretch of territory along eastern and southern Ukraine.
Ukraine says tens of thousands of civilians died in nearly three months of Russian siege and bombardment that lay the city to waste. The Red Cross and United Nations say the true toll is uncounted but at least in the thousands, making it the bloodiest battle in Europe at least since the Chechnya and Balkan wars of the 1990s.
Moscow denies targeting civilians in its "special military operation" to disarm and "de-Nazify" its neighbour. Ukraine and the West say Russian forces have killed many thousands of civilians in an unprovoked war of aggression.