PM's remark on Khaleda amounts to a 'death threat' 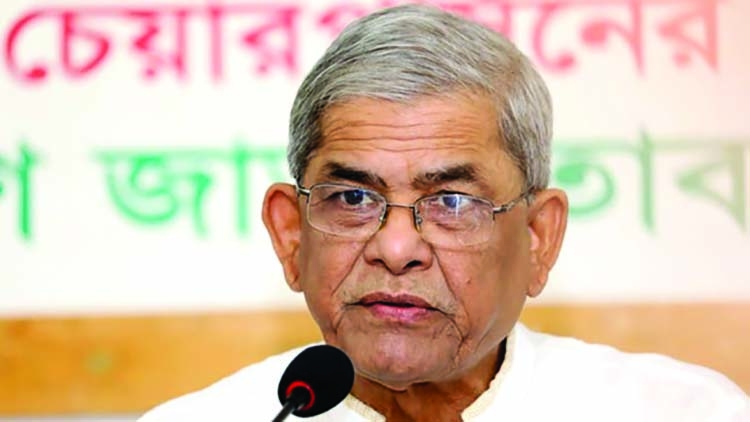 BNP Secretary General Mirza Fakhrul Islam Alamgir on Thursday alleged that Prime Minister Sheikh Hasina's remark on pushing Khaleda Zia into the river from the Padma Bridge is tantamount to a direct 'death threat'.
"I was surprised by the prime minister's statement on the Padma Bridge involving our leader (Khaleda).  Being a prime minister of a country, no matter how she comes to power, can't make such a comment," he said.Speaking at a meeting of Jatiyatabadi Sramik Dal at the district BNP office, Fakhrul also said their party chairperson Begum Khaleda Zia is a former PM and Leader of the Opposition, UNB reports.
He said talking about throwing a national leader off Padma Bridge can never be a normal thing. "The prime minister's remark is tantamount to a direct death threat. I was shocked and angry over such a comment, and I strongly condemn it."The BNP leader said their party never expects such apolitical and indecent statements from the head of the government. "But that is her natural trait. This is how she speaks and this is how she behaves indecently with her political opponents. It is devoid of any political etiquette."
He also bemoaned that it is unfortunate for the nation to tolerate such a leader.  "All the statements she (Hasina) is making these days are completely devoid of political etiquette and decency."Fakhrul said people with healthy thoughts can never make such a statement. "I strongly protest the remark and urge her to refrain from making such statements.  Otherwise, we will look for a legal option."
Earlier on Wednesday, Prime Minister Sheikh Hasina told a discussion meeting of Awami League that Khaleda Zia once said that the Padma Bridge would collapse while using it as it was being constructed with patchworks. "What should now be done to them? They should be taken to the Padma Bridge and pushed into the river from there," she said.
The much-awaited Padma Bridge is likely to be opened to traffic in last week of June.About the ruling party leaders' comment on hatching a plot against the government with the help of foreigners, Fakhrul said it is an old habit of Awami League. "They always talk like that. They have looted the ballot boxes during the last two elections. This party always takes a stance against the will of the people."

The BNP leader also said Awami League is used to seek the blessings of foreigners to hang onto power. "The foreign minister went to America and sought its assistance in the next election. We have not done such a thing. But it's also Awami League's habit to blame others."He said the current regime must quit handing over power to a non-party neutral government, paving the way for holding the next election under a new election commission. "The government will be forced to accept people's demand," he said.