Passing of a legend 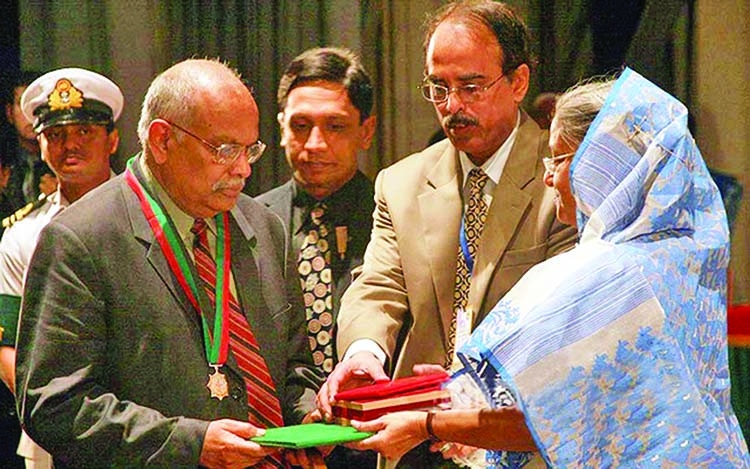 Abdul Gaffar Chowdhury received the Sadhinota Padak on March 25, 2009 from Prime Minister Sheikh Hasina. -File Photo
With the sad demise of eminent journalist and columnist Abdul Gaffar Chowdhury, Bangladesh has lost her another golden son who has eternalized the memories of 1952 language martyrs with the lyrics 'Amar bhaier rokte rangano Ekushey February'.
Abdul Gaffar Chowdhury breathed his last at Barnet Hospital in London in London at 6:59am on Thursday at the age of 88, family sources said. He was suffering from diabetes and kidney disease.
Gaffar Chowdhur was the editor-in-chief of the weekly Joybangla, the mouthpiece of the Mujibnagar government of 1971. Though he had lived in London since 1974, he was always vocal in support of the Liberation War, Bangabandhu and liberal values.
President Abdul Hamid and Prime Minister Sheikh Hasina expressed deep grief over the death of Abdul Gaffar Chowdhury. They sent condolences to the bereaved family and prayed for salvation of departed soul. Cabinet members and different socio-cultural organizations expressed deep sorrow at the death of Abdul Gaffar Chowdhury. The Asian Age editorial board chairman Shoeb Chowdhury expressed profound shock at the demise of Gaffar Chowdhury. He prayed for salvation of the departed soul and conveyed heartfelt sympathy to the bereaved family.
Family sources said that first namaj-e-janaza is scheduled be held at London's Brick Lane mosque after juma prayers. Later, his body will be kept at the Shaheed Minar of historic Shaheed Altab Ali Park in East London to allow British-Bangladeshi community and other admirers to have their last glimpse of the legendary journalist.
The place of his burial will be determined soon, said the family sources.
Abdul Gaffar Chowdhury was born in Ulania village in Mehendiganj of Barishal on December 12, 1934.
He graduated from Dhaka University in 1959 and went to England on October 5, 1974.
Before moving to the UK, Abdul Gaffar worked as a journalist in different national newspapers in Dhaka. During the 1971 Bangladeshi Liberation War, he worked for Joy Bangla, Jugantar and Anandabazar Patrika.
In the UK, he founded the newspaper Notun Din. He wrote 35 books. From London, he regularly wrote columns for Bangladeshi dailies, Bangla newspapers published by the Bangladeshi community in UK, and a daily newspaper in Kolkata.
Gaffar Chowdhury has received numerous awards including Bangla Academy Literary Award in 1967, Ekushey Padak, UNESCO Literary Award, Bangabandhu Award, Sanghati Lifetime Achievement Award in 2008, Sadhinota Padak in 2009.