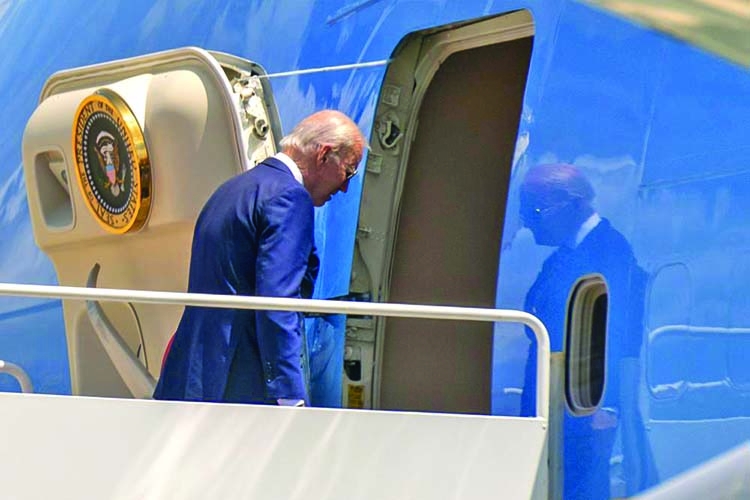 President Joe Biden boards Air Force One at Andrews Air Force Base, Md., Thursday, May 19, 2022, to travel to Seoul, Korea to begin his first trip to Asia as President. -AP
President Joe Biden hopes to use his visit to Asia to confirm his belief that long-standing friendships can afford to become even friendlier - and pay dividends. His six-day trip starts in South Korea on Friday and ends in Japan at a time when world events are resetting the foundations of the global order.
The corona virus pandemic disrupted supply chains and exposed the fragilities of a trade system focused primarily on low prices for consumers and high profits for corporations. Then Russia's invasion of Ukraine ushered in a return to Cold War-era intrigues.
The U.S. and other wealthy democracies - including Japan and South Korea - banded together to help Ukraine and punish Russia, but not all countries were ready to side with the alliance. China, India and others have aimed to stay cordial with Russia without crossing the sanctions.
The uncertainty leaves Biden determined to show that America's ultimate power rests with its ability to make friends and influence people rather than the raw capacity of its military and economy. A look at some of the key issues and themes on the table for Biden's visit.
Relations between Japan and South Korea have been at their worst in decades because of disputes over wartime history and trade. These are rifts that the countries' two new leaders appear willing to heal, with Biden as a possible interlocutor who could help bring them closer together.
South Korea's Yoon Suk Yeol assumed the presidency a week ago on the expectation of better ties with Japan. Japanese Prime Minister Fumio Kishida, who took office in October, spoke with Yoon by phone the day after his March election victory, saying "sound relations" are crucial for regional and international peace and stability.
As Kishida sees it, the rules-based order is threatened by Russia's invasion of Ukraine. Japan fears the war that began in February could embolden China to seize territories in the Pacific, a big reason why better relations with South Korea are desired.