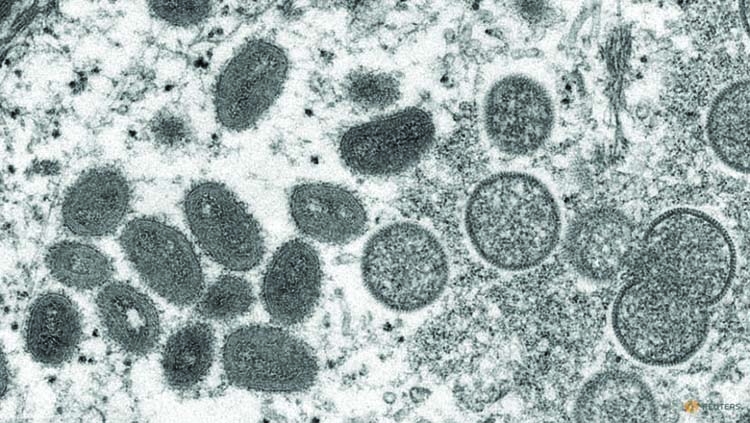 An electron microscopic image shows mature, oval-shaped monkey pox virus particles as well as crescents and spherical particles of immature visions. -Reuters
Australia on Friday (May 20) reported its first monkey pox case in a traveler who recently returned from Britain, while a probable case of infection was identified with testing being carried out to confirm it.A man in his thirties who arrived in Melbourne on Monday has the virus, Victoria state's health department said, while the probable case was identified in Sydney in a man in his forties who had recently travelled to Europe.
Both men developed mild illness after arriving back in Australia with symptoms clinically compatible with monkey pox, health officials said."Just to reassure the community, it is not the same spread mechanism as COVID or flu, where it is more fleeting," New South Wales state Chief Health Officer Kerry Chant told reporters.Cases of monkey pox have been identified in several non-endemic countries in recent weeks, including Britain, Italy, Portugal, Spain, Canada and the United States.
Monkey pox, which mostly occurs in west and central Africa, is a rare virus similar to human smallpox, though milder. It was first recorded in the Democratic Republic of Congo in the 1970s. Cases in West Africa have increased in the past decade. Symptoms include fever, headaches and skin rashes starting on the face and spreading to the rest of the body. People can contract monkey pox through very close contact with those who are infected with the virus.Australian health officials have taken steps to identify and manage any monkeypox cases including clinical alerts to doctors and hospitals, Chant said.