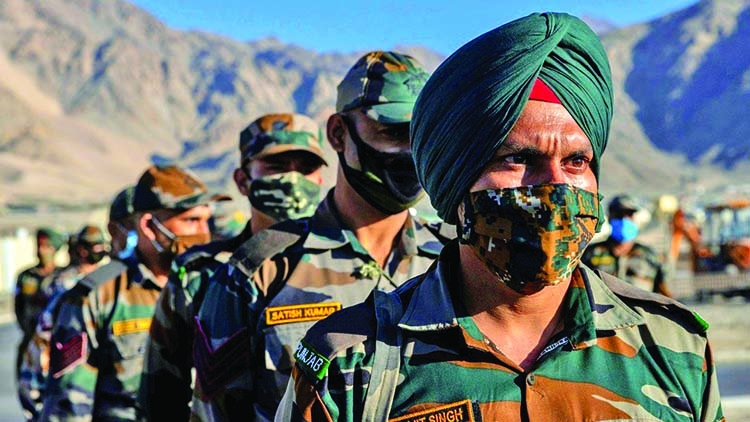 Indian soldiers at a forward airbase at Leh in the Ladakh region. -Reuters
India on Friday objected to China's construction of a second bridge across disputed Pangong Lake, an area it said has been under the "illegal occupation" of China since the 1960s. India's challenge comes amid a two-year-old standoff involving thousands of soldiers from the two countries that has sometimes led to deadly clashes in eastern Ladakh, reports AP.
"We have never accepted such illegal occupation of our territory, nor have we accepted the unjustified Chinese claim or such construction activities," said Arindam Bagchi, spokesperson of India's External Affairs Ministry. There was no immediate comment from China.
The development is expected to impact efforts by army commanders from the two countries who have been discussing steps to disengage troops from key areas along the disputed border.
Bagchi said the Indian government has stepped up construction of border infrastructure especially since 2014, including roads and bridges, to protect its security interests.Both countries have stationed tens of thousands of soldiers backed by artillery, tanks and fighter jets along the de facto border called the Line of Actual Control. In 2020, 20 Indian troops were killed in a clash with Chinese soldiers involving clubs, stones and fists along the disputed border. China said it lost four soldiers.
Since February last year, India and China have withdrawn troops from some areas on the northern and southern banks of Pangong Tso, Gogra and Galwan Valley, but they continue to maintain extra troops as part of a multitier deployment.Additional troop deployment has also taken place at Demchok and Depsang Plains, Indian media reports say.
The Line of Actual Control separates Chinese and Indian-held territories from Ladakh in the west to India's eastern state of Arunachal Pradesh, which China claims in its entirety. India and China fought a war over the border in 1962.
Since the standoff began last year, the Chinese have been building dozens of large weather-proof structures in eastern Ladakh for their troops to stay in during the winter. New helipads, wider airstrips, new barracks, new surface-to-air missile sites and radar locations have also been reported by Indian media.