Millions hit by floods in Sylhet 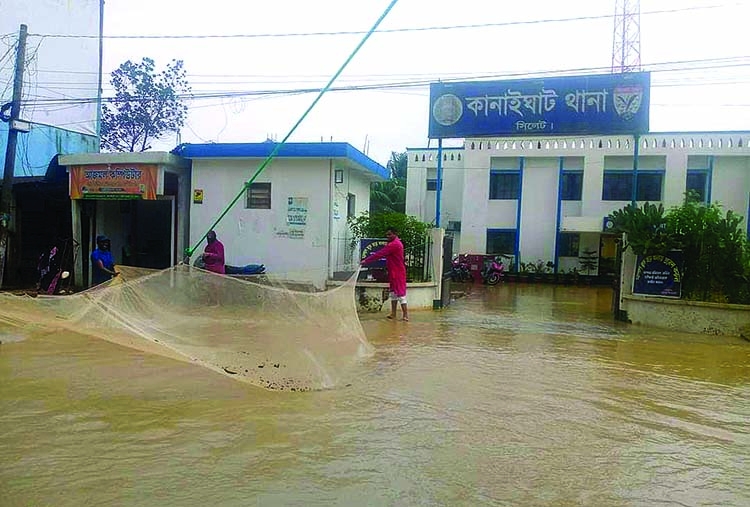 People catch fish with net on the flooded road in front of Kanaighat Police Station in Sylhet on Friday. -AA
Though eight days have passed, the flood situation in Sylhet district has not improved and millions of people have been affected due to the flash floods triggered by Heavy rains and the onrush from upstream.
The Surma and Kushiarar rivers continue to flow above the danger level due to the onrush of hilly waters from India as 2,200 mm of rainfall has been recorded in Cherrapunji of Meghalaya state in the last eight days.
The dyke, a long wall built to prevent flooding, collapsed at the Barak river along the border with India, due to the onrush of hilly waters in the small hours of Friday, inundating several areas of Zakiganj upazila, including Fillakandi, Amalshid, Barthakuri, Khasirchak, Khairchak, Baroghatta and Sonasar. Affected people are struggling to get food and drinking water.
At least 13 Upazilas have been flooded, forcing the authorities to open 326 shelters across the district, the authorities said. As many as 7,349 people have taken refuge in 95 centres. Local residents who have taken refuge in shelters said they have been facing a severe food and drinking water crisis as tubewells were flooded underwater and a three-day power cut disrupted the supply.
A sudden onrush of mountain runoff from upstream has affected most of the areas close to the border, causing immense suffering to residents of the Companiganj, Gowainghat, Jointiapur, Zakiganj and Kanaighat Upazilas. Floods have also damaged the transport system in those areas, forcing the authorities to close educational institutions. According to the District Agriculture Extension Office, 1,301 hectares of Aush paddy field, 1,704 hectares of Boro field and 1,004 hectares of summer vegetables went under water on Thursday. Sylhet

Meteorological Department senior meteorologist Sayeed Ahmed Chowdhury said heavy rains are expected in the district till next Sunday. From next Monday or Tuesday, the rainfall will decrease.