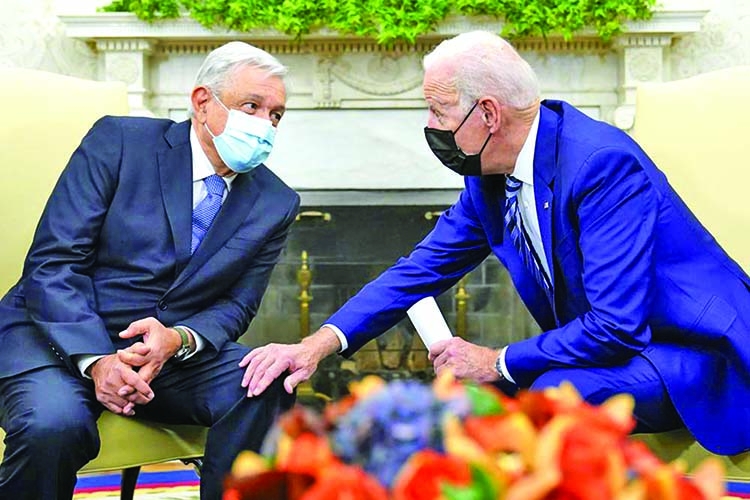 President Joe Biden meets with Mexican President Andrés Manuel López Obrador in the Oval Office of the White House in Washington, Nov. 18, 2021. -AP
While President Joe Biden travels in Asia, his administration is scrambling to salvage next month's summit focused on Latin America.
The Summit of the Americas, which the United States is hosting for the first time since the inaugural event in 1994, has risked collapsing over concerns about the guest list. Mexican President Andrés Manuel López Obrador has threatened to boycott if Cuba, Venezuela and Nicaragua aren't included. Unlike Washington, which considers the three autocratic governments as pariahs, Mexico's leftist leader maintains regular ties with them.
A hollow summit would undermine efforts by the U.S. to reassert its influence in Latin America when China is making inroads and concerns grow that democracy is backsliding in the region. Now Biden is considering inviting a Cuban representative to attend the summit as an observer, according to a U.S. official who declined to be identified while speaking about sensitive deliberations. It's unclear if Cuba would accept the invitation - which would be extended to someone in the foreign ministry, not the foreign minister himself - and whether that would assuage López Obrador's concerns. López Obrador reiterated Friday that he "wants everyone to be invited," but indicated that he was hopeful about reaching a resolution, adding that "we have a lot of confidence in President Biden and he respects us." Even if López Obrador attends, there could still be a notable absence in Los Angeles: Brazil's Jair Bolsonaro, who leads Latin America's most populous country, hasn't said whether he'll attend. The uncertainty is a sign of chaotic planning for the summit, which is scheduled to take place in a little more than two weeks in Los Angeles. Normally, gatherings for heads of state are organized long in advance, with clear agendas and guest lists.