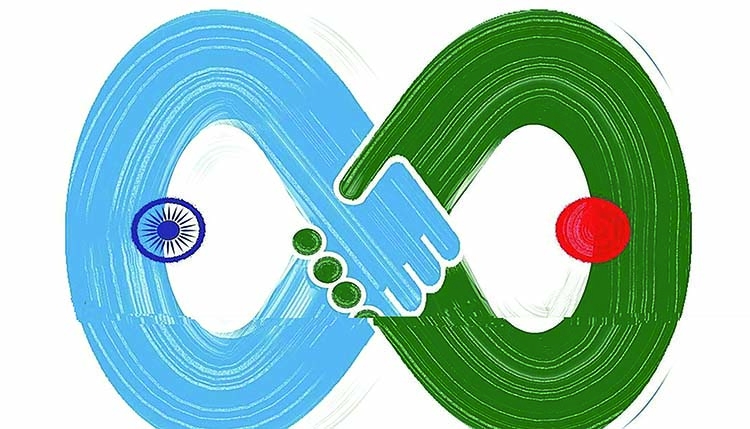 India and Bangladesh are steadily forging ahead with warm relations and one such instance was noticed in the recent past when the Indian External Affairs Minister (EAM), S Jaishankar paid a visit to Dhaka and delivered a personal message from the Indian Prime Minister Narendra Modi to his Bangladesh counterpart, Prime Minister Sheikh Hasina.  The visiting Indian EAM also held informal talks with the host Prime Minister as well as with the Foreign Minister.  This visit is seen significant as PM Modi is believed to have extended an invitation to Sheikh Hasina to visit India in the near foreseeable future.  It is likely that sooner than later, dates of the visit would be announced leading to a flurry of diplomatic activities on the upcoming visit and setting up a structured agenda for the bilateral talks.
In India's immediate neighborhood, Bangladesh is rightly perceived as the staunchest friend of India.  Although there remains a number of unresolved issues between the two countries, yet both are sincerely committed to reinforce ties.  The strengthened relations between the two countries have been highlighted time and again by Hasina and her other party leaders.  India, including the PM, has also been resonating often about the firm bilateral relations. Amid these developments, the Bangladesh Foreign Minister, AK Abdul Momen disclosed for having sought India's assistance in lifting sanctions against the Bangladesh elite force Rapid Action Battalion (RAB) which is under the scanner for alleged US charge that RAB was involved in violation of human rights in Bangladesh causing disappearances and "encounters".  US has also cancelled visas of seven RAB officials.
On one hand, BD Foreign Minister's trust and confidence reposed in the Indian dispensation is indicative of strong existing bilateral ties yet the statement has not augured well with a section of the Bangladesh watchers who feel that while the bilateral ties were on a firm footing, it was what they described was below dignity and misuse of "good neighbourly relations".  Further criticizing the Foreign Minister, most prominent BD-English newspaper The Daily Star, in a commentary on April 28, termed it as demeaning and castigated the BD FM for having met the members of the Indian American community (US Citizens of Indian origin), who constitute 4.5 million Hindus as a very influential group and assured the FM to take up the issue with the US to lift the sanctions.  Basically, the `Daily Star' and others of similar thoughts took umbrage for leaving out Muslims from being a part of Indian diaspora.  This act, according to such BD watchers, reflects a weak mindset rendering Bangladesh incapable of dealing with the US with India help.  In the same vein, BD Foreign Ministry came under blistering attack for an ambiguous foreign policy which contradicts Hasina's repeated pleas to walk tall with head high with pride.  This emotional ire came to the fore by thecritics as Bangladesh is in its 51st year of Independence, any "submission" to India is perhaps to caution PM Hasina to maintain country's dignity intact without exceeding any red line.
The above also demonstrates that there are occasional irritants caused by the detractors of Hasina who would always try to be acting as watchdogs to sensitize Hasina while dealing with India.  Ironically, little do they understand that India is the only committed friend of Bangladesh and it is a reality-based diplomacy to bail RAB out of the shadow of US sanctions and apparently there is nothing wrong in it.  It is only notional that Indian diaspora is used to help Bangladesh and the Indians at large would be more than happy to help a friendly country like Bangladesh.  Such needling need to be ignored by both the countries and instead they should move forward to ensure that any distractions should not derail the already cemented relations between the two.
Against this backdrop, Sheikh Hansa's emerging visit to New Delhi is expected to lay fresh emphases to the bonding.   It is noteworthy that Bangladesh will go to polls late next year and the political temperature is likely to be very high in run up to this important event. A good relationship with India will signal the Bangladesh's about the firm commitment both the countries owe to each other not only out of diplomatic necessity, but also out of moral commitments to each other.
Reverting to EAM's Dhaka visit, it may be stressed that the Minister stressed that Bangladesh features as the most important country in the Indian Foreign Policy objectives of "Neighbourhood First Policy". Bangladesh and India have been maintaining an excellent relationship even during the pandemic when the whole world was at a standstill. Jaishankaralso appreciated Bangladesh for the transformative socio-economic development under the dynamic leadership of Prime Minister Sheikh Hasina.He further emphasized on promoting trade, commerce and connectivity especially in the light of supply chain disruption resulting from Covid-19 restrictions and recent conflict in Ukraine.He assured of India's cooperation in resolving some of the concerns of Bangladesh including the early repatriation of forcibly displaced Myanmar nationals to their country of origin.  Such articulations will form the core of the structured agenda taking Indo-BD ties to new heights during the summit of both the Prime Ministers.


Shantanu Mukharji is a retired IPS officer, a security analyst and a former National Security Advisor to the Prime Minister of Mauritius.