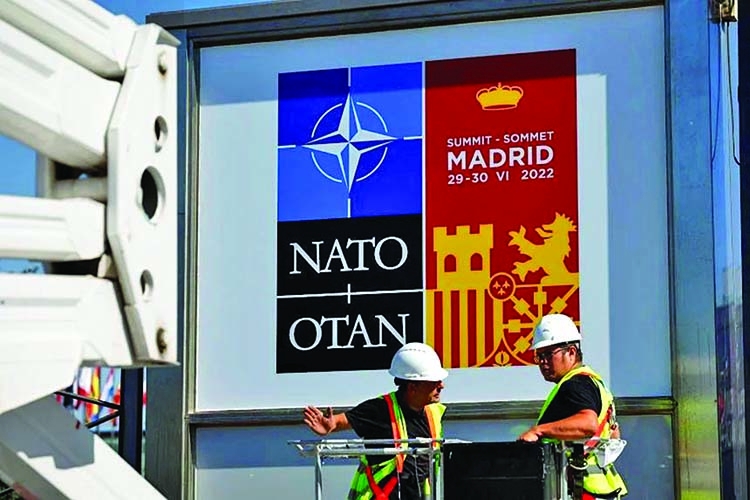 Workers paste posters outside the Madrid Fair before a Nato summit in Madrid, Spain, on June 27, 2022. -Reuters
Nato is set to label China a "systemic challenge" when it outlines its new policy guidelines this week, while also highlighting Beijing's deepening partnership with Russia, according to people familiar with the matter.The so-called Strategic Concept document will outline the alliance's priorities for the coming decade, and is due to be signed off by Nato leaders at a summit in Madrid this week, Bloomberg reports.
The previous version, published in 2010, made no mention of China and referred to Russia as a partner, wording that is set to be scrapped.Allies won't go as far as to call China an adversary, said the people who declined to be named on a confidential issue.The document is expected to highlight concerns at China in areas like cyber-security and disinformation, as well as control of critical infrastructure and compliance with the rules-based international order.
Nato allies have been hashing out the wording of the outlook for months. The language on China has been a particularly difficult hurdle to balance allies' different interests, with the US taking a tough stance on Beijing.
Several European allies including Germany, which has close economic and trading ties with China, have sought a moderate stance in the document.The negotiations on the text are ongoing and it is subject to change before leaders sign off on it.
China frequently accuses the US of trying to form blocs to suppress its growth. In March, Foreign Minister Wang Yi used his annual news briefing to warn Washington against trying to build a version of Nato in the Indo-Pacific, saying the goal was "to maintain the US-led system of hegemony."
Several Asian nations - like their counterparts on Russia's European frontier - have sought closer security ties with the US to keep from being dominated by the region's biggest player. China has active border disputes with neighbours including Japan, India and Vietnam, and has stepped up military, diplomatic and economic pressure on Taiwan. Allies may agree to remain open to engagement with China, the people said. By contrast, Russia is set to be called a "direct threat" to alliance security and any change in relations would depend on Moscow stopping what Nato terms its aggressive behaviour and complying with international law.
"The meaningful dialogue we worked for, for so many years, that's not on the table, that's not working simply because of Russia's behaviour - they have chosen confrontation over dialogue," Nato Secretary-General Jens Stoltenberg told reporters Monday (June 27). "We regret that but of course we need to respond to that reality."
That relationship seems unlikely to be restored anytime soon, according to Professor Mary Elise Sarotte, a historical studies expert at SAIS Johns Hopkins University and author of "Not One Inch: America, Russia, and the Making of Post-Cold War Stalemate."
"It seems clear that Nato and Russia are indeed headed for Cold War-style relations for an extended period," Prof Sarotte said, adding there would be differences as Mr Putin isn't trying to restore Communism and it wouldn't be as bipolar as in the 20th century.
Following Russia and China's announcement of a "no limits partnership" and a trend of Chinese officials spreading Russian disinformation about Moscow's invasion of Ukraine, allies see an increasing pattern between the two and the need to start tackling it, an official said. Addressing China in the Strategic Concept is "realistic," according to Prof Sarotte, "since Nato can hardly ignore China's rise." She added: "But, for now, the priority will be not the longer-term contest with China, but the shorter-term violence in Ukraine."