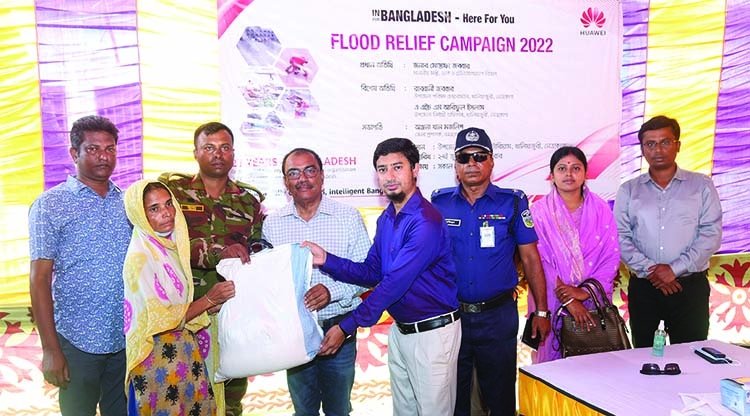 Huawei Technologies (Bangladesh) Limited has distributed relief materials among the flood-affected people of Netrakona on Monday to give them a respite from the damages caused by the flood. The relief distribution event was held at Upazila Parishad Auditorium, Khaliajuri on June 27 with the presence of Rabbani Jabbar, upazila parishad chairman; AHM Ariful Islam, UNO of Khaliajhuri, Major Zisanul Haider.
The chief guest, Posts and Telecommunications Division's Minister, Mustafa Jabbar; Anjana Khan Mojlis, Deputy Commissioner (DC) of Netrakona and Board Member of Huawei Bangladesh, Jason Li joined the event virtually.The recent flood impacted Netrakona after Sylhet and Sunamganj. Residents in 39 unions in six upazilas of Netrakona district were affected by floods amid a rise in water levels on major rivers in the district.
Many houses, roads, and educational institutions in Netrakona Sadar Upazila, Barhatta, Purbadhala, Khaliajuri, Kalmakanda and Durgapur were affected by floods. Some areas on the bank of rivers have faced river erosion.
Huawei, as a responsible business entity, has extended its support in the aid of the people in need. They distributed relief items among the flood-affected people of the Netrakona district, as a part of their initiative, named "In Bangladesh, For Bangladesh - Here For You".  Approximately 2,000 flood-affected families have received essential items including rice, red lentils, potatoes, oral saline, sugar, flour and others.  Mustafa Jabbar, minister of the Posts and Telecommun-ications Division said: "Over the years, Huawei has been making an incredible contribution to the development of the country's ICT sector.
In addition to that, with initiatives like this, they have also proven their concern towards the country by helping the disaster-struck people."Jason Li, board member of Huawei Bangladesh said: "A significant portion of the people in Bangladesh has been suffering from flood for the last few days. As a localized global company operating in Bangladesh, we feel responsible to stand for them. Hence, we have organized this relief program, as a part of our initiative 'In Bangladesh, For Bangladesh - Here for you'. Our effort may not wipe away their sufferings but can be considerable aid in their struggle."