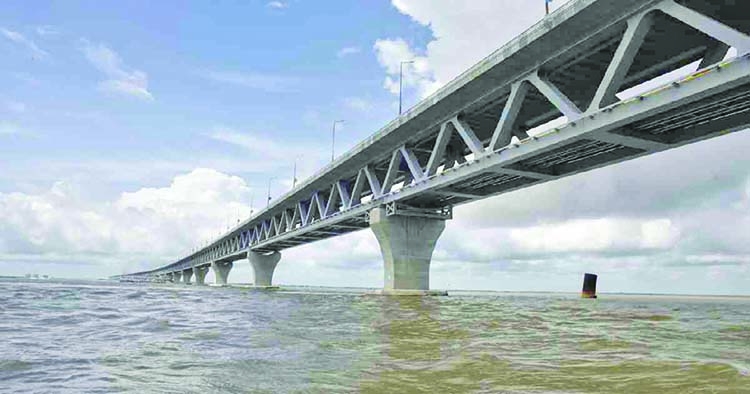 The much-awaited Padma Bridge finally opened to traffic on Sunday. With this, the tourism industry of the country's southwest region is expected to undergo massive transformation.Thousands will get jobs, a new economic corridor will be opened for the region's people. New establishments will grow centering Khulna, Bagerhat and Kuakata and the number of tourists will increase. Income from the tourism sector will also shot up manifold, according to officials and tour operators.The expected transformation will be brought about by the Padma Bridge, reports UNB.
According to Bagerhat district administration and the government's archeology department, two out of three UNESCO-declared world heritage sites of the country are in Bagerhat region. On one side of the district is the Sundarbans, the largest mangrove forest of the world, and on the other side is the historical Sat Gombuz Mosque (Sixty Dome Mosque).
There are 17 more UNESCO-declared important sites in this area. In fiscal year 2021-22, a total of 1.2 lakh tourists came to visit the Sundarban's Bagerhat part and 1.8 lakh tourists visited the Sat Gombuz Mosque. Revenue earned by the government from these two sites has been Tk 1.25 crore and Tk 60 lakh, respectively.
Sheikh Shakir Hossain, member of Sundarban Tourist Club, said that the only way to enter and exit Bagerhat district is through roads.
"The opening of the Padma Bridge will definitely increase the number of tourists coming to Bagerhat, as better road connections will be established now," Shakir hoped.
Rubel Hossain, a trawler trader from Khulna's Mongla area, said that their main business is related to The Sundarbans' Eco Tourism Center and the forest's Wildlife Procreation Center in Karamjal.
"It takes about half an hour to reach Karamjal from Mongla on a trawler. The number of tourists in this route used to be low due to bad road networks, which will change now through the introduction of Padma Bridge to the region's road connectivity," Rubel said.
Md Kamruzzaman, owner of a hotel in Khan Jahan Ali's Shrine area, said that the hotel owners of the area had to incur heavy losses due to a lack of tourists throughout the year.
"Padma Bridge will make travelling to Bagerhat easier and attractive, which will result in increased tourists. Hotel-motel owners will be able to do good business from now on. Besides, many new hotels and motels will also be set up to cater to the growing demands of the tourists," said Kamruzzaman.
According to Md Zayed, Custodian of Bagerhat Archeology Department, a rest house has been built in front of the Sat Gombuz Mosque.
"Besides, a walkway has been built around Ghoradighi, a lake adjacent to the mosque. Bangladesh Parjatan Corporation has spent around Tk 13 crore to build a three-star hotel on the intersection in front of Khan Jahan Ali's Shrine. 80 percent works of this hotel has already been completed," said Zayed.
Deputy Commissioner of Bagerhat district Md Azizur Rahman said that the district administration is working to improve the road connections of the district.
"We hope that Bagerhat's tourism industry will grow through the utilization of the Padma Bridge," Azizur said.