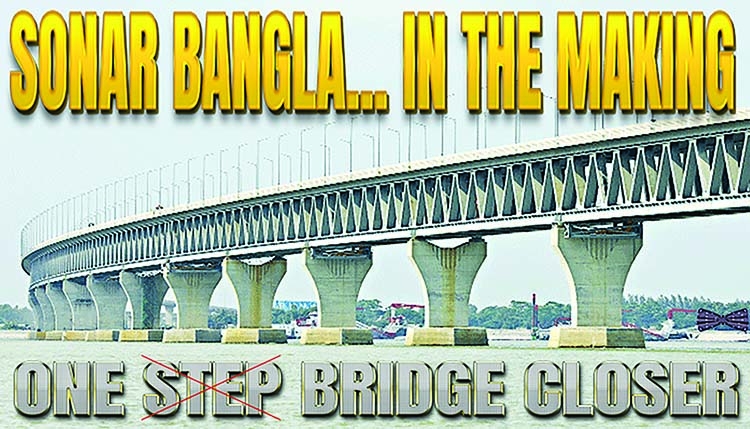 When will the madness and cruelty of corporal punishment end? Bangladesh is seemingly taking two steps forward and one step back.We've built an all-inspiring and most-impressive bridge.
We've muted the naysayers and valiantly conquered the seemingly impossible to showcase to the world, in part at least, the new vibrant and progressive SONAR BANGLA in-the-making. The world is  standing erect and applauding in appreciation.
Next to the news columns hailing the magnificent historic achievement that had Prime Minister Sheikh Hasina beating her chest in glorious triumph, we read abhorrent, shocking news about two teenage boys being scalded with hot boiling water at a madrassa.
Let's not rest on our laurels, having accomplished building the majestic Padma Bridge. Now let's get serious and build another bridge between schools, madrassas and homes and eliminate corporal punishment in all settings, including the prison system, police stations, and anywhere else the vile evil practice is likely to be found.
Let's show the entire world we are a civilized, Allah all-fearing enlightened nation capable of greatness and also building a loving society in which all of us will benefit - individually and collectively - now and in the future.
The alleged diabolical incident that happened on the eve of the historic Padma Bridge opening at the Jamiah Arabia Rahim Newaz Khan Hafizia Madrasa in Shreefultoli, Gazipur, should trigger the need for EVERY parent to be aware of what goes on in the schools and madrassas where they send their children.The story goes that two boys Rakibul Islam (15) and Abrar Hassan Jisan (9) had HOT water poured over them by a 'teacher' of questionable character at the madrassa.
Teacher? - A teacher of what? A teacher in terrorism...what's bad and evil... cruelty... disrespect... might is right... the works of Satan on earth? It certainly couldn't be in demonstrating the love of Allah.

Emergency Hotline 999
Adding insult to injury the madrassa authorities refused to talk with families of the victim students over the matter. So the parents phoned the National Emergency Hotline 999 and police attended, under the direction of Sub-Inspector (SI) Hafizur Rahman of Kaliakoir Police Station.
But wait... wait... there's more evil. The 'teacher' also shaved the heads of five other students that day. Inanity personified? Yes, perhaps, but at least he's consistent in performing his evil and wickedness.
We had a similar case back in 2021 when another alleged 'teacher' Farhana Yasmin Baten cut the hair of her 14 male students as punishment. One pupil was said to have contemplated suicide because of the humiliation.
Last month we had a class 10 student viciously beaten black and blue by a 'teacher' at Gomdandi Pilot High School under Boalkhali upazila in Chattogram. How these 'teachers' qualify to become teachers is a total mystery. The mind boggles. Alll schools and madrassas should be corporal punishment zero zones.
But the main prize (so far) must go to the Talimul Quran Mahila Madrasha in Kadamtali where 14 girls who were scarred for life when the 'teacher' branded each child on their leg with a red-hot cooking spatula to give an example of what hell is like?  Incredible, but true and we allow people like that to teach our children. The mind boggles. For God's sake what is going on?
Who are these wicked people to whom innocent God-fearing, God-loving parents have entrusted their loved offspring into their care to acquire and embrace the beautiful loving teachings of Almighty Allah? Why are they allowed to get away with their sins? Why are they receiving salaries from the government?
A 'teacher' in a regular government or private school may be excused (not that I would) for subjecting a child to corporal punishment because of its own questionable upbringing, stupidity, and sheer ignorance. But the same abuse given in a madrasa is reprehensible and totally unpardonable.  These are deemed to be sanctified places. Diabolically, the horrific evil is actually being executed in the name of Allah.

Justices Md. Imman Ali
In 2011 Supreme Court justices Md. Imman Ali and Md. Sheikh Hassan Arif outlawed corporal punishment in Bangladesh's schools and madrassas. They said at the time "there are by now numerous countries of the world, both advanced and less developed, who have adopted prohibition of corporal punishment both at home and in the education institutions. As this is for the benefit of children, who are citizens of this country and future flag-bearers of the nation, we believe that corporal punishment should be prohibited throughout the country in all settings".
They went on to declare corporal punishment to be 'cruel, inhuman and degrading treatment and a clear violation of a child's fundamental right to life, liberty and freedom'.  There's been some change in Bangladesh since 2011, far less suicides, but more change is needed.
A study, 'Violence against Children in Bangladesh', by the Manusher Jonno Foundation and INCIDIN Bangladesh reports about 96 per cent of children face torture at home at the hands of their parents and about 82 per cent of children face repressive behaviour in educational institutions.

The study questions the whole culture of parenting where the deep-rooted tradition of corporal punishment to children is still in wide practice.The UN Convention on the Rights of the Child emphasises that domestic violence violates the rights of children as it has a harmful effect on their development. This is a violation of children's rights when they even witness domestic violence in the family. It denies children their right to a safe and stable home environment. Parents may not be hitting the children physically, but they are damaging them mentally.
There are key ministries in all governments throughout the world that have an indelible impact on the present and future of the people and nation. If they do a good job they transform into heroes and heroines. For them to get the sums wrong, however, could spell disaster for the nation. The Finance Ministry and Education Ministry immediately spring to mind.
On one hand we have Prime Minister Sheikh Hasina announcing to the nation and entire world the children are the future of Bangladesh and telling how they are treasured. On the other hand we have ignorant, cruel and masochistic 'teachers' on the payroll of Dr. Dipu Moni's education ministry damaging them, possibly for life. It has to stop.
Many of the problems have been inherited by the Education Minister Dr. Dipu Moni who, no doubt, is facing an uphill battle with a large number of major problems cancerous to the education system, but if they're not addressed, they will never go away ,
I sincerely hope Allah will bless Dr. Moni with the wisdom and strength needed to overcome all, for the greater benefit of Bangladesh. Above all else, it is she together with Prime Minister Sheikh Hasina, who can begin to make the greatest contribution to the Sonar Bangla evolution.
Joi Bangla!