Call for justice gets louder 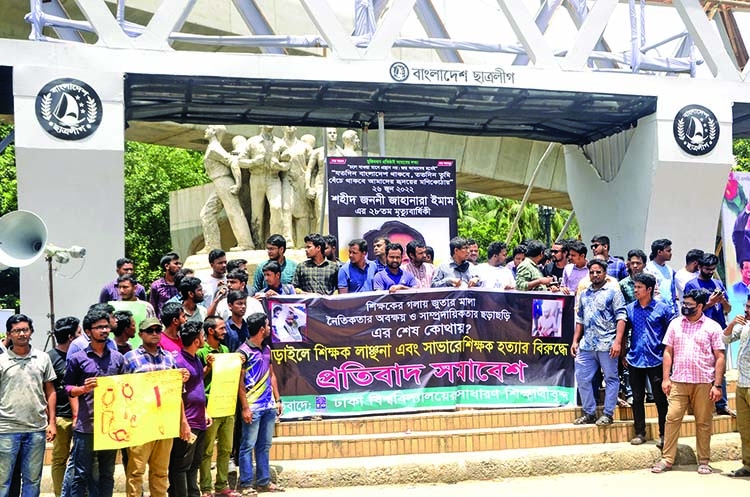 Dhaka University students demonstrate at the altar of the Raju Memorial Sculpture at the campus with call for legal measures against the culprits behind attacks on teachers. -Mostafizur Rahman, AA
Conscious people across the country have voiced outrage over the recent attacks on teachers in Savar and Narail. Swapan Kumar Biswas, acting principal at Mirzapur United College of Narail, was forced to wear a garland of shoes on 18 June after a tense situation centering a Facebook post on a leader of India's ruling BJP, by a student of the college.
Another teacher of Haji Yunus Ali School and College in Savar Utpal Kumar Sarkar was seriously injured when a student hit him with a cricket stump on Saturday. He later died at Enam Medical College Hospital in Savar on Monday morning.
Students of Dhaka University demonstrated on Tuesday against the attacks on teachers at the altar of the Raju Memorial Sculpture at the campus to call for legal measures against the culprits. Teachers also joined the protest.
The Dhaka University Teachers' Association, however, condemned the humiliation of Swapan and the killing of Utpal in a statement signed by General Secretary Nizamul Hoque Bhuiyan after the protests.
Amid protests, police arrested three people in a case over the humiliation of Narail college principal. Mohammad Shawkat Kabir, officer-in-charge of Narail Sadar Police Station, said on Tuesday they made the arrests on Monday night after the cases was filed in the afternoon.
Shadhinota Shikkhak Parishad (Shaship) staged a human chain and protest rally in Savar on Tuesday demanding immediate arrest of the culprits behind the killing of teacher Utpal Kumar Sarkar.