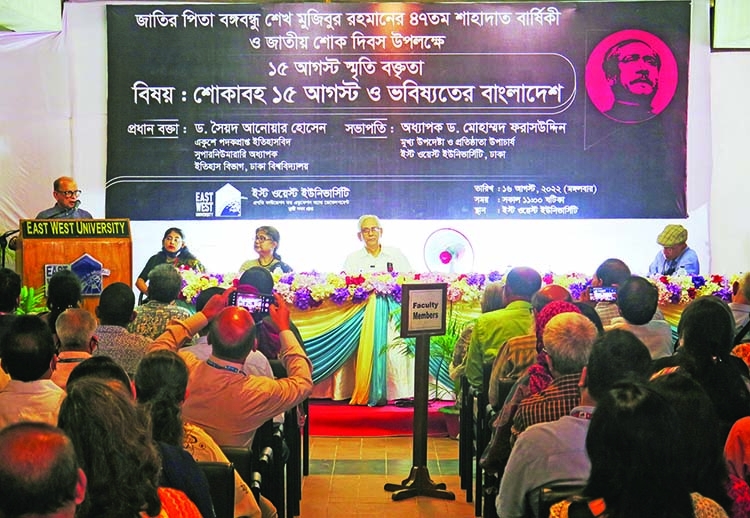 East West University (EWU) organized a program to commemorate the National Day of Mourning held on Tuesday at EWU Campus, Aftabnagar, Dhaka. The distinguished speaker was Ekushey Padak winner and eminent scholar, Professor Dr. Syed Anwar Husain.
In his deliberation, Dr. Husain said Bangabandhu was a selfless, pro-active and motivated leader who dreamt of an independent Bangladesh soon after the creation of Pakistan and planted his dream in heart of millions of Bangladeshis. Bangabandhu started the reconstruction of a war-ravaged country to turns it into an economically stable, developing nation.
The program was chaired by Professor Dr. Mohammed Farashuddin, Chairperson (Acting) of the Board of Trustees, EWU. In his speech, Dr. Farashuddin recalled his close association with Bangabandhu when he was appointed as his Private Secretary in early 1972, soon after the liberation. Prof. Farashuddin explained the philosophy that was behind the creation of BAKSAL and how its proper implementation would have turned Bangladesh into a modern welfare state within a decade. Looking into the future, Dr. Farashuddin praised the socio-economic gains Bangladesh has made over the last decade and hoped the country will successfully overcome the current challenges.
Professor Dr. M. Ziaulhaq Mamun, Vice Chancellor (Acting), and Professor Dr. Fouzia Mannan, Dean, Faculty of Liberal Arts and Social Sciences, EWU also spoke on the occasion.