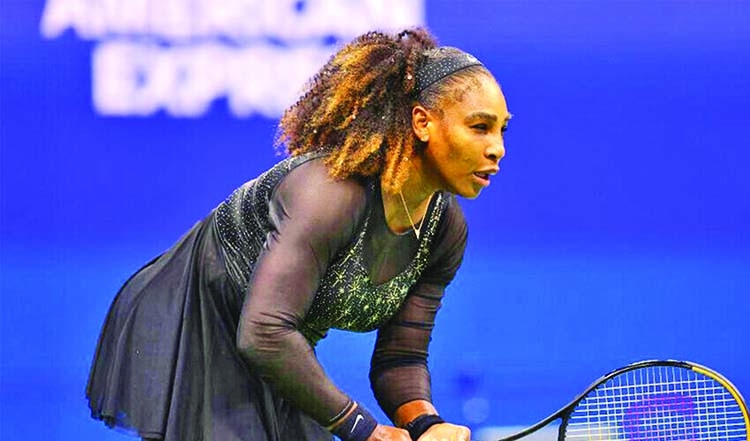 USA's Serena Williams seen against Estonia's Anett Kontaveit during their 2022 US Open Tennis tournament women's singles second round match at the USTA Billie Jean King National Tennis Center in New York on Wednesday. -Collected
Serena Williams insisted that she feels "like I've already won" the US Open after dramatically extending her iconic career with a never-say-die, three-set victory over world number two Anett Kontaveit on Wednesday.
The 40-year-old, 23-time Grand Slam title winner triumphed 7-6 (7/4), 2-6, 6-2 in front of a raucous, partisan Arthur Ashe Stadium Court crowd to reach the third round of a tournament she has won six times.
Having declared that she was already "evolving away from tennis" after a 27-year career, Williams' force of will ensured that the retirement party was put on hold for a little longer.
"I just feel like I have had a big red X on my back since I won the US Open in '99. It's been there my entire career, because I won my first Grand Slam early," said Williams."But here it's different. I feel like I've already won, figuratively, mentally. It's just pretty awesome the things that I've done."
Williams first played the US Open in 1998 and won her first major at the tournament a year later when she was just 17.
But this US Open is widely expected to be the last of her career which has brought 73 titles as well as a personal fortune estimated at $250 million.
"There's no rush," said Serena on court when reminded that she had declared herself to be in the closing stages of her career. "There's still a little left in me so we'll see. I'm a pretty good player. I love a challenge." "I'm just Serena, you know. I don't have anything to prove. I have absolutely nothing to lose." On Wednesday, Serena unleashed 11 aces and 38 winners past Kontaveit who cut a forlorn, shellshocked figure at the conclusion of the match. Williams had arrived at the tournament having played just four matches since last year's Wimbledon. Her ranking had slumped to 609.
Without a Grand Slam title since the 2017 Australian Open and frustratingly one major short of Margaret Court's record of 24, she had admitted that the "countdown" to retirement was on.
However, she credited golf legend Tiger Woods with helping her rediscover her famed competitive spirit. Woods was in the stadium to lend his support on Wednesday night."He's one of the reasons I'm here, one of the main reasons I'm still playing. So we talked a lot," said Williams of 15-time major winner Woods who is fighting his own battle to return to the peak of his powers.

"He was really trying to get me motivated, We were like, Okay, we can do this together."It was good, because I didn't know what I wanted to do. I was just lost, so many questions. When you can rely on someone like that, I mean, my goodness, he's Tiger Woods, it was really helpful to get clarity."On Wednesday, Williams arrived on court with the stadium announcer proudly introducing her as "the greatest of all time" while Kontaveit waited patiently at her chair.