Two trucks rammed into each other in Bogra, killing seven persons just past midnight. - bdnews24.com
Five of those killed were policemen, one a police cleaner and anothera truck driver, said Bogra Sadar police station OC Aslam Ali. He said the accident occurred on the Dhaka-Bogra highway at Sherpur Upazila around 1am.

The dead policemen were identified as constables Shahjahan, 35 , 'Pranab', 32, Shamsul Islam, 30, 'Alamgir', 33 and 'Sohel', 32 and  a cleaner with the police Shyamal Chandra, 42. Police suspect the other killed in crash was the driver of the truck, rented by police.

OC Aslam said that five others injured in the collision have been admitted to the Ziaur Rahman Medical College Hospital in Bogra. He told bdnews24.com that the policemen killed were posted at the Kurhigram Police Lines and were heading for Dhaka.

Another truck, loaded with fertiliser, rammed into the one carrying the policemen at Sherpur's Mahipur, causing the fatalities. Four died on the spot, three were later pronounced dead by doctors at the Ziaur Rahman Medical College Hospital. -  bdnews24.com 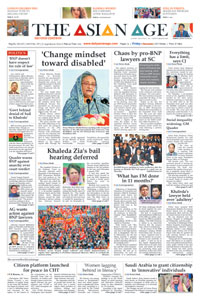