The ethos of Mujibnagar Historical guard of honor to the Acting President of Mujibnagar government, Mr. Syed Nazrul Islam on 17th April 1971, led by SP Mahbub Uddin Ahmed, Bir Bikram.
The story goes back to April 1971. It was a government driven by a cause. The men who were part of it, indeed shaped it, were the bravest of our political heroes. They were young men, dedicated to the cause of freedom. When you think back on Syed Nazrul Islam, Tajuddin Ahmed and AHM Quamruzzaman, you cannot but be struck by the youth in them. M. Mansoor Ali was slightly older.

Professor Yusuf Ali was young. Barrister Amirul Islam was younger. MAG Osmany was of course a veteran in terms of age and service in the army, but all those others were young people, in their thirties. And all these people, fired by patriotic zeal, were there to wage war against the military might of an organized state.

They were all patriotic Bengalis responding to the call of Bangabandhu Sheikh Mujibur Rahman. And Bangabandhu, if you remember, was a mere fifty one years old, in incarceration a thousand miles away from home. Bangabandhu and the Mujibnagar men, in broad terms, were emblematic of youth. And revolution could only come from the young.

In April 1971, then, the revolution that would come to be known as Bangladesh was organized and led to a natural and successful culmination by young men and women awakened to the need for a reassertion of heritage. There were the civilian government officers in the police and in the administration, all young Bengalis convinced that the land had to be purged of the enemy and its cloying collaborators.

They made their way to Mujibnagar, to identify with the national cause. In their wake, thousands of even younger Bengalis turned their back on home, on family, in towns and in the villages, and marched into battle. Many of them would not return home. Many would. Freedom, the need for it, was their bugle call.

And then, in light of the happening of 17 April 1971, would come droves of artistes, journalists, doctors, academics and students to enlist their names to the cause. Mujibnagar would be a symbol, of everything ennobling, everything inspiring, about politics. For the first time in history, a republic formed by Bengalis and constituted of Bengalis and administered by Bengalis was what happened in Mujibnagar.

If 17 April was the beginning of a sustained, disciplined march to liberty, the preparation for it had been made on 10 April and then on 12 April. Tajuddin Ahmed, having informed the world that Bangladesh was on its way, needed along with his party colleagues to have that message of freedom go out to the world louder and clearer and without ambiguity. The world was there on 17 April, at Baidyanathtola in Meherpur, an isolated spot of earth destined to go down in history as Mujibnagar.

Supreme patriotism coupled with promise of supreme sacrifice defined this nation in April 1971, days before the provisional government gave shape to itself. Driven by conscience and love of country, two young Bengali diplomats, in the service of Pakistan, laid themselves open and vulnerable to uncertainty on 6 April at Pakistan's diplomatic mission in India. KM Shehabuddin and Amjadul Haq walked away from their jobs, informed the media of the pain of seeing their land going up in smoke at the hands of the state they had served all these years, of their moral requirement to sever all links with the aggressor state.

Shehabuddin and Haq, like everyone else drawn to the battle for Bangladesh, were heroic men in that year of endless misery and, in the end, infinite glory. There were others, Hossain Ali for instance. A day after the rise of Mujibnagar, he pulled down the Pakistan flag from Islamabad's deputy high commission in Calcutta, replaced it with the Bangladesh green-and-crimson and gave the War of Liberation yet another shot in the arm.

Beauty and reality flowed from Mujibnagar, as did the promise of a new dawn. It was the very first test for men of poetry determined to transform themselves into soldiers for freedom. Poetry and politics thus wrapped themselves around each other; and seventy five million people came together in a historic demonstration of defiance of the arrogance of shallow men.

Other people in other countries spoke up for Bangladesh. George Harrison and Ravi Shankar and Joan Baez rent the skies of New York with songs of passion, lyrics that brought Bangladesh to every home in the civilized part of the globe. Songs were what the artistes of Shwadhin Bangla Betar sprinkled on the battlefields of Bangladesh, on the rain-drenched camps of the ten million refugees across the border with India.

The war claimed lives in surefire fashion. As the Pakistan army went after unarmed, innocent civilians in the villages and towns, the guerrillas of the Mukti Bahini drove increasing fear into the heart of the enemy. The soldiers were in deadly fear of the Muktis; and they panicked as their territory shrank in slow, steady degrees.

Mujibnagar brought all Bengalis together. Outside the occupied land of Bangladesh, Bengalis across the diaspora banded together to aid the cause back home. These Bengalis, with roots in Bangladesh as also in West Bengal, came together in a forceful demonstration of common ethnicity.

There were the good, conscientious Pakistanis, Malik Ghulam Jilani and Ahmed Salim for instance, who identified with the Bengali cause. Another Pakistani, in the diplomatic service of his country and shamed by the murder and mayhem caused by his nation's army, placed his services before the Mujibnagar government. Iqbal Athar would in time gain Bangladesh citizenship and serve his new country abroad with distinction.

That was Mujibnagar. This morning, we owe it to ourselves, to our three million martyrs, to bow in reverence to the memory of Tajuddin Ahmad, Syed Nazrul Islam, A.H.M. Quamruzzaman and M. Mansoor Ali --- for they showed us light at the end of the long dark tunnel. These men of Mujibnagar would come home to a free Bangladesh, in triumph, on a winter afternoon.

The writer is associate editor
of The Asian Age 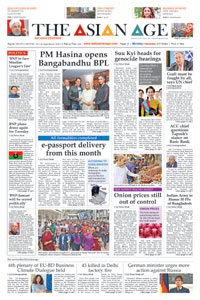