The 19th death anniversary of anti-British revolutionary leader Debendra Nath Ghosh alias Biplobi Deben Ghosh observed in Barisal on Thursday with due respect. Biplobi Debendra Nath Ghosh, the legendary socio-political personality of the region and fighter of anti-imperialism and human rights movement, was born on April 22 of 1890 and died on January 11 of 1999 at his home in Kawnia Club Road area of the city. Deben Ghosh had been detained in jail for about 27 years for his uncompromising attitude against the colonialists, imperialist and autocrats.

He was also detained with father of the nation Bangabandhu Sheikh Mujibur Rahaman. The day was observed in Barisal by 'Biplobi Deben Ghoshe Smriti Rokkha Committee' with religious rituals, floral tributes at his cremation ground in morning and blanket distribution among the distressed people, discussion meeting at afternoon. Akkas Hossain, convener of the committee, presided over the blanket distribution, discussion programmes held at Barisal Shikkhakok Samity auditorium of the city on Thursday afternoon. 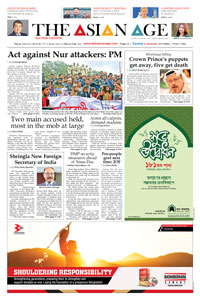