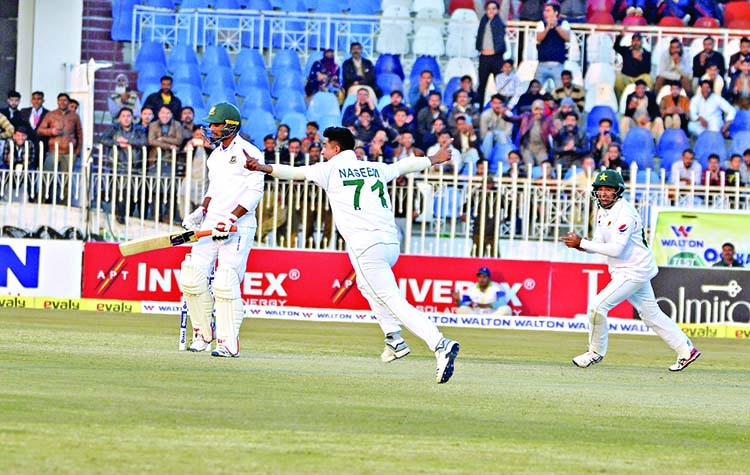 Pakistan fast bowler Naseem Shah celebrating after becoming the youngest cricketer to claim a hat-trick on day three against Bangladesh in the first Test at Rawalpindi Cricket Stadium on Sunday. -PCB
Touring Bangladesh faces the ignominy of losing the opening test of the two-match Test series as they are facing an uphill struggle to prevent innings defeat against Pakistan's rampant pacer after losing six second innings wickets on Sunday at Rawalpindi Cricket Stadium.
Bangladesh was tottering 126-6 at stumps on day three with skipper Mominul Haque on 37 not out with Bangladesh needing to bat out at least three sessions to avoid defeat. After another Bangladesh batting collapse handed the hosts the upper hand at Rawalpindi as the visitors lost four late wickets shortly before stumps. Teenage paceman Naseem Shah really rocked Tigers in the last session.
Fast bowler Naseem  entered the recordbook by claiming  a hatrick including the prized wicket of Nazmul Hossain Shanto (38) that ended a threatening 71-run stand for the third wicket with Mominul. Tigers stuttered to 53-2 in post-tea session then counterattacked through Shanto and Mominul before Naseem rocked. With the hat-trick, Naseem became the youngest cricketer to record the feat in Test cricket.
Only 16 years and 359 days, Naseem, trapped Najumul Hossain Shanto leg before off the fourth ball of his seventh over, then followed up with dismissals of Taijul Islam and Mahmudullah with successive deliveries. Bangladesh's leg-spinner Alok Kapali was previously the youngest to record a Test hat trick -- at 19 -- also against Pakistan, in Peshawar in 2003.
Naseem, who burst onto the scene on Pakistan's Australia tour last year, is also the youngest fast bowler and second bowler overall to take five wickets in a Test innings. He achieved that feat at 16 years and 307 days against Sri Lanka in Karachi last year. Naseem finished 4 for 26 runs in an outstanding 8.2-over spell of deadly pace bowling. Leg spinner Yasir Shah also kept the visitors under pressure by having Tamim Iqbal and Mohammad Mithun.
But the morning belonged to Tigers. After a forgettable day with ball on day two, Bangladesh bowlers turned in a better performance with the ball in the first session yesterday and picked up the remaining seven Pakistan wickets shortly after lunch as Azhar Ali's men were forced to stop at 445 in their first innings. Pace duo Abu Jayed and Rubel Hossain grabbed three wickets each while spinner Taijul Islam took two wickets.
Tigers started their second innings positively as senior Tamim in company by fresher Saif Hasan combined 39-run stand. Paceman Naseem hwoever broke the stand by deceiving debutant Saif for 16. Tamim was the second casualty of the innings when he was trapped by Yasir's leg spin. It was left Shanto and Mominul to lift the innings.
The duo batted positively and kept Pakistan pacers at bay. But the climax came shortly before stumps when Azhar backed Naseem into the attack. Naseem however justified captain's wise decision by making visitors big trouble.