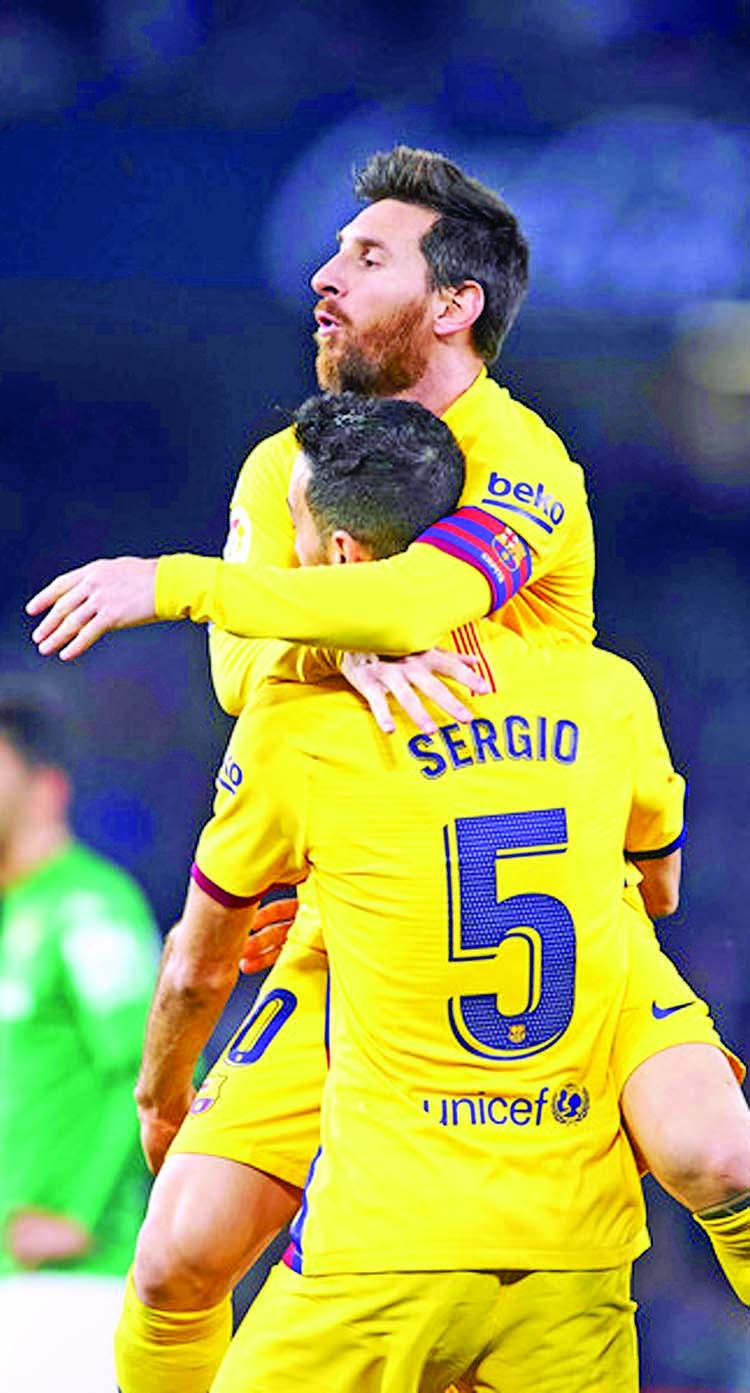 Sergio Busquets celebrates with his teammates Lionel Messi after scoring his team's second goalduring the Liga match between Real Betis Balompie and FC Barcelona at Estadio Benito Villamarin on February 09, 2020 in Seville, Spain. -Getty
Lionel Messi produced a hat-trick of assists as Barcelona pulled off a gutsy 3-2 win at Real Betis after trailing twice in an enthralling match in La Liga on Sunday, finally giving the Catalans something to celebrate after a week of upheaval.
Clement Lenglet headed home the decisive goal in the 72nd minute from a Messi free kick, earning second-placed Barca a first away win in the league in four matches and cutting the deficit behind leaders Real Madrid back to three points.French defender Lenglet was then sent off for two bookings, moments after Betis' Nabil Fekir had been dismissed for earning two yellow cards in the space of a minute.
Barca coach Quique Setien was making his first appearance back at Betis since being sacked by the Seville club last May and desperately needed a victory after Real had beaten Osasuna 4-1 earlier in the day. But the visitors got off to a terrible start when Sergio Canales gave Betis the lead in the sixth minute from the penalty spot after a VAR review showed Lenglet had handled the ball.
Dutch midfielder Frenkie de Jong promptly equalised with the help of a lofted pass from Messi but Barca soon found themselves on the back foot again when Betis restored their lead with a strike from World Cup-winning forward Fekir in the 26th minute. Messi proved pivotal in the Catalans levelling right before halftime, delivering a free kick into the path of Sergio Busquets who converted from close range.

The Argentine was also able to pick out Lenglet for the winning strike, setting up a goal for the fifth time in three games. The topsy-turvy encounter was a fitting end to a dramatic week for Barca in which Ousmane Dembele sustained a serious injury, Messi lashed out at sporting director Eric Abidal and the team lost 1-0 at Athletic Bilbao to exit the Copa del Rey.
"This is a hugely significant win for us because Betis are a great team and were being roared on by their fans at home," Barca coach Setien told a news conference. "This is a very important victory because it keeps us near the top of the table and it will give us a huge psychological boost."
Barca, who hired Setien last month after sacking Ernesto Valverde, had not won away from home in the league since beating Atletico Madrid on Dec. 1 and were smarting from a recent defeat at Valencia as well as the last-gasp loss in the Cup to Bilbao. "
It was so important for us to win after losing in the Cup in the last minute but we just had to keep playing in the same way and that's what we did," added Barca's Sergi Roberto."It was vital that we found our form and started winning away from home again so we go home feeling happy."
---Reuters, Seville