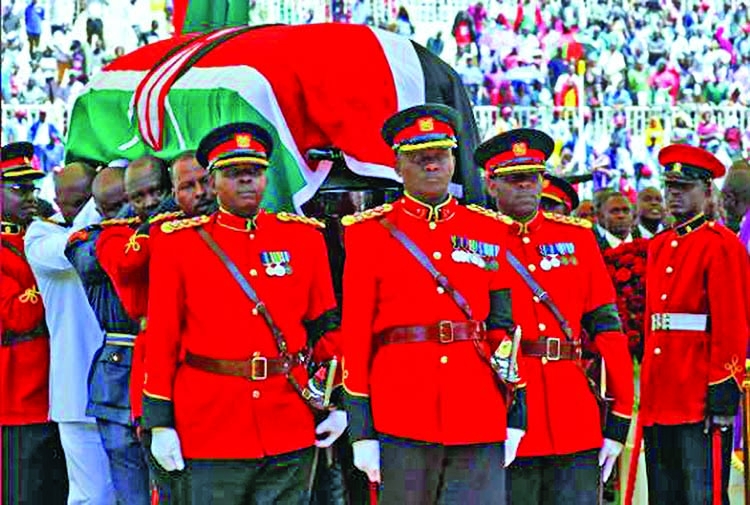 Military officers carry the coffin of late former Kenya's President Daniel Arap Moi draped in the national flag after his memorial service at the Nyayo Stadium in Nairobi, Kenya on Tuesday. -Reuters
Tens of thousands of Kenyans gathered at an open air stadium on Tuesday for the state funeral of Daniel Arap Moi, the country's longest serving president, who died last week aged 95.
Moi's coffin, draped in the Kenyan flag, was carried on a gun carriage from the State House, the official seat of the presidency, on the 5 km (3 mile) route to the stadium in the capital, Nairobi.
Troops from the Kenyan army, air force and the navy marched alongside into the stadium, where choirs were singing gospel songs as they awaited the cortege of the man described by critics as a virtual dictator.
"Moi was a humble man. Anybody who knew him, they know he was a humble man. President Moi never bragged in any success ... instead he attributed it to God," long-time friend Silas Yego, a retired bishop of the Africa Inland Church, where Moi had worshipped, told the mourners."Moi believed if you want to succeed, never tell a lie."
Moi came to power in 1978 when he was serving as vice-president after the nation's first leader President Jomo Kenyatta died. He remained in power until the end of 2002.He held power for longer than any other leader since independence and left a legacy of corruption that still haunts the East African nation.
During his rule, thousands of activists, students and academics were held without charge in the underground cells. Prisoners say they were sometimes denied food and water.He succeeded in keeping Kenya relatively stable compared to many of its troubled neighbors.
But he floundered badly on the economy as poverty deepened and corruption flourished. A 2004 report by corporate investigations firm group Kroll accused Moi and his inner circle of stealing $2 billion of state funds - an accusation dismissed at the time by the government.
He won elections in 1992 and 1997 amid a divided opposition. But he was booed and heckled into retirement when term limits forced him to step down in 2002 and he lived quietly for years on his sprawling estate in the Rift Valley.
Several leaders from the region, including the Ethiopian President Sahle-Work Zewde, Rwanda's President Paul Kagame, South Sudan's Salva Kiir and Uganda's Yoweri Museveni joined President Uhuru Kenyatta and the other mourners at the service.Moi's son Raymond gave the former president's eulogy and Kenyatta was also expected to address the crowd. Tuesday was declared a public holiday.
---Reuters, Nairobi